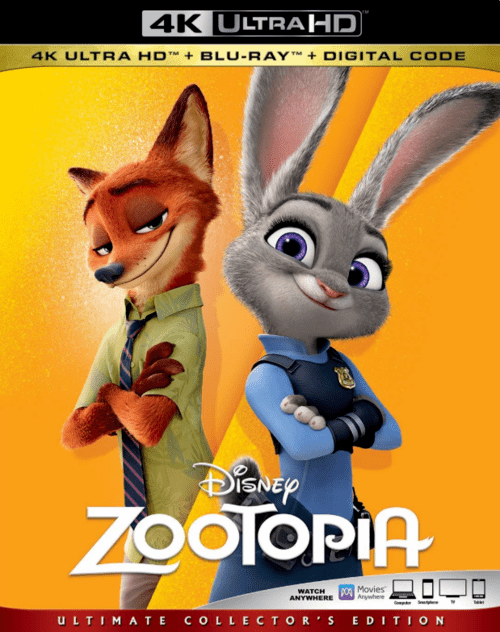 USA Movies / Animation 4K
Producer: Byron Howard, Rich Moore
Cast:Ginnifer Goodwin, Jason Bateman, Idris Elba, Jenny Slate, Nate Torrence, Bonnie Hunt, Don Lake, Tommy Chong, J.K. Simmons, Octavia Spencer, Alan Tudyk, Shakira, Raymond S. Persi, Della Saba, Maurice LaMarche.
IMDB 8.0
File Size 43.91 GB
Film description
Taken from IMDB.COM
Welcome to Zeropolis - a modern city populated by a wide variety of animals, from huge elephants to tiny mice. Zeropolis is divided into areas that completely repeat the natural habitat of different residents - there is also an elite area, Sahara Square and the inhospitable Tundratown. A new police officer appears in this city, a cheerful rabbit Judy Hopps, who from the first days of work understands how difficult it is to be small and fluffy among large and strong police officers. Judy grabs the first opportunity to prove herself, despite the fact that chatty, cunning fox Nick Wilde will be her partner. Together, they will have to solve a complex matter, on which the fate of all the inhabitants of Zeropolis will depend.

4k movies reviews
Two years after the premiere of the animated cartoon, Disney again delights us with a new project! Of all the cartoons coming out in 2016, Zeropolis was the most anticipated for me. And judging by the reaction of the audience - a new hit awaits us!

The action of the cartoon takes place in the animal world. No seriously. The main characters are anthropomorphic intelligent animals that wear clothes, go to work, use high technology, in general, lead the most modern life. As we recall, animals are very diverse - predators and herbivores, large and small, living in the desert, tundra, jungle. And the dream of them all is to live in the largest and most beautiful city of Zveropolis, where everyone who has a dream comes to. Charming Judy Hopps, who wants to work in the police, has a dream. Despite the fact that she is a rabbit, and all the rabbits work on the farm ... But Judy graduated with honors from the police academy and gets a job in the Department of Zveropolis. There she has to prove to her large and formidable colleagues that even cute and furry animals can become a thunderstorm of criminals and the pride of the police. And here is just the point where Judy can prove herself, but she will have to work with Nick Wilde, a sly fox and an illegal entrepreneur ...

Releasing a new cartoon for rent, the creators do their best to surprise the viewer. And the creators of Zveropolis succeeded with splendor: this is a completely new, interesting, original world where all possible animals live. In this world, everything is adapted to their size, habits, basic needs, and habitat. Zeropolis itself consists of areas where representatives of absolutely any habitat can live. And also the heroes of the film are intelligent animals that wear clothes, are savvy in matters of high technology, constantly use modern gadgets. In addition, we were shown a city where only animals live. Surely there are also the cities of Birds, Reptiles and Pisces ... I think the franchise has great potential for development!

As you already noticed, the world of Zveropolis is a mirror image of our modern world. We see social stratification, familiar costumes, familiar advertising banners, familiar logos on smartphones, and also familiar government agencies ... In general, this is also a pretty hilarious parody of modern society! On the one hand, watching them is fun, but on the other, there is something to ponder. For example, about predators and herbivores. Older people will see much more here than it seems, but for children it will be an instructive lesson: that no matter who you were born, the main thing is who you are now and what you strive to be ... Speaking of aspirations. This is the key theme of the cartoon - about dreams, goals and cherished desires. The fact that you need to believe in yourself, go to your goal, even if others doubt you. This is very motivated by the song Try Everything, which is performed by Shakira (who voiced one of the roles in the film).

We put aside all seriousness and reflection, and think about the pleasant - the cartoon is incredibly hilarious! And these are not only ordinary jokes, which were plenty in the cartoon, but also amazing parodies! Just remember Mr. Big - this episode details and with humor reproduces the beginning of the Godfather! And if you look closely at the advertisement, you will notice familiar banners, symbols, emblems that catch our eye every day. Well, most of all, the audience laughed at the episode with sloths: here everyone sees his own - my girlfriend sees the Russian Post, and I absolutely any bureaucratic institution ... They laughed so loudly that I’m not sure that everyone understood who the idler was Blitz - and it was Nikolai Drozdov!

The main characters are also good in the cartoon, in which viewers can see themselves. Judy Hopps is a charming bunny who dreams of working in the police. She is not stopped by the fact that she is small, cute and fluffy, that she is not taken seriously, that many laugh at her ... She stubbornly goes to her goal, trying to prove to everyone that she can. Nick Wilde is a sly fox engaged in illegal business. He also had dreams, but life turned out differently. The paths of the two heroes involuntarily intersect, and they are forced to work together. There is also one of my favorite stories, when two completely different heroes go on a dangerous journey and in the course of it become best friends. Here everything is complicated by the fact that foxes and hares were originally enemies, and it is very difficult to step over centuries-old prejudices.

What I especially liked about the characters and in the Russian dubbing is their speaking names and the way they were translated. Very nice was a police officer Clawthauser - a cheetah and a lover of goodies. Judy's boss is captain Buffalo. Mayor of Zveropolis Leo Zlatogriv. Family of Otringtonov. Assistant Mayor Miss Bara?kis. Singer Gazelle ... I would like to reconsider the cartoon in order to better examine the characters, the details of their costumes, the environment and much more!

Zeropolis is a wonderful cartoon. Without a doubt, he will be liked by children who fall in love with furry heroes, and adults will see how other, more serious topics are revealed in the cartoon and will be able to think. But I was completely delighted and I will look forward to the upcoming sequels!