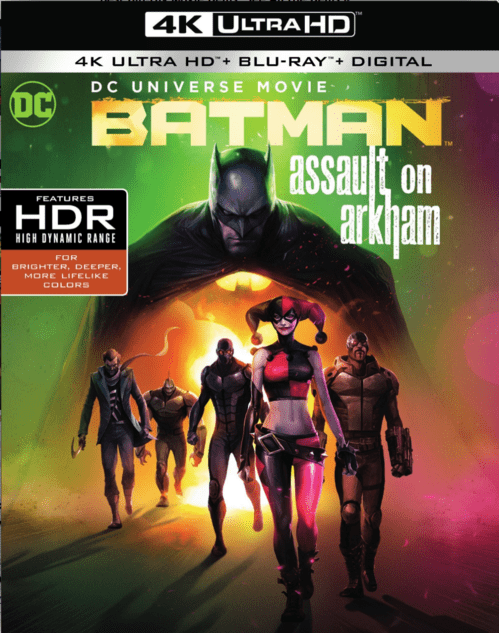 Full-length cartoons about Batman never attempted to equal only the children's and teenage audience. These were quite serious, gloomy, in some ways even cruel works, aimed primarily at a more mature viewer. Batman: Under the red cap, The Dark Knight: The Renaissance of the Legend (not to be confused with Nolan's film), Batman's Son - these films contained both blood and hard battles, and touching on interesting moral and ethical themes that would hardly be understood by the children.

However, in the case of Batman: Assault on Arkham 4K I want to say that this is just a good cartoon from DC for adults and no more, the main task of which is to draw the attention of fans of the Batman: Arkham series of games. There are no moral and ethical problems raised here, if you are waiting for this, then you just did not come to the right place. Here, the main bet is made on the magnificent live animation, which just fills the life of the local coolest action scenes, seriously, the battles in this cartoon are not worse than in any notorious Reid, only with the addition of gunfire battles, slightly on the plot and quite a little bit at the humor. The story here is not very original, and its main feature is that the team of supervillains, forced to work for the government, is brought to the fore. Despite this, it is worth acknowledging that the whole story is interesting and keeps you in suspense until the final (the ending will shock you, I guarantee). That is, the main characters in this cartoon are Batman's enemies, and not Batman, which, to be honest, is even a bit superfluous, I would not be upset at all if he were not here at all. In short, before us, sort of "The Expendables" in the envelope of the supervillains of the DC Universe. To them I have absolutely no complaints: Harley Quinn is a sweet schizophrenic, Deadshot is a stern leader, King Shark is a stereotypical thug who was born to shred and beat, Captain Boomerang is an irritable rebel, a rival of Dadshot for the right to be the leader, etc. The rest of the characters also inspire. Troy Baker masterfully copes with the role of the Joker, no worse than Maestro Mark Hamill, and in some places even an order of magnitude better. His Joker is still a bloodthirsty psychopath, attracting attention with his wild charm. Riddler in the picture a little, but it is worth confessing that the charisma of the character is, a sort of evil genius, not afraid of anyone and nothing. You can continue for a long time. For a little timing in the picture, even for a couple of seconds almost all the notable characters of the universe of Batman managed to light up. Of course, the characters are not prescribed as well as we would like, however, one of their appearances on the screen delivers a sea of pleasure.

In general, everything that concerns voice acting, animation, dynamics and cool characters the picture performs for five with a plus. The most important thing for me is the fact that the writers tried to provide us with classic reptiles from a more mundane position. In my opinion, the attempt to make personalities with super-villains with their own experiences and thoughts turned out to be weak. Yes, Dadshot has a daughter whom he loves very much, yes, King Shark is not indifferent to Murderer Frost, but the entire drama is shown so superficially that it seems that it was needed only for a tick. Of course, without it it was impossible to do without, otherwise it would be difficult for the viewer to empathize with murderers, inadequacies and bastards, but still these primitive dramatic schemes could be improved, add a few new cogs and build a fascinating story that keeps not only the charisma of characters and fights . However, we have what we have.

Verdict: A solid action-cartoon with charismatic characters, a curious storyline and an interesting idea to show us supervillains as actors. Was the film successful? Of course. Is this the best cartoon from DC? Hardly. All lovers of the pictorial action are required to watch.