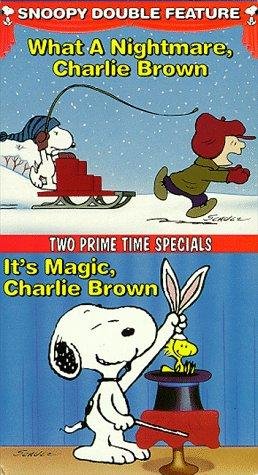 Story Movie
Taking advantage of a newly acquired magic tricks kit, Snoopy decides to put on a magic act. For the finale, he turns Charlie Brown invisible, but he can't change him back right away. While Snoopy searches for the counter spell, Charlie Brown struggles with this bizarre problem, but realizes that he has a golden opportunity to finally kick Lucy's football.

It's Magic, Charlie Brown 4K Review
A magic show can only mean disaster for poor Charlie Brown and his friends, especially when Snoopy is the magician. This charming special is an exceptionally good one in the long line of Peanuts specials, containing the basic ingredients that make up the Peanuts strips- humor, simplicity, and innocence.

Snoopy puts on a magic show for the neighborhood kids, and when he makes Charlie Brown disappear (for real!) he can't figure out how to get him back. But rest assured, Snoopy always finds a way in the end, doesn't he? This show gives us some surprising twists to the ordinary world of Peanuts, including a glimpse (for the first and only time, as far as I know) inside Snoopy's doghouse, Charlie Brown's victory at kicking the football (maybe), and a rare moment of Lucy getting (in my opinion) her well-deserved comeuppance when Snoopy performs a feat of levitation on her and leaves her in a very interesting situation.

Great fun is always had with Charlie Brown and the gang. This is definitely one to add to the collection.
We now have