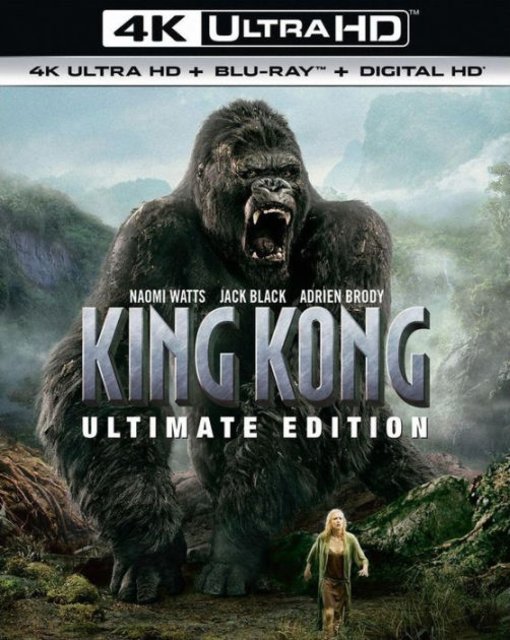 Story movie
Carl Denham needs to finish his movie and has the perfect location; Skull Island. But he still needs to find a leading lady. This 'soon-to-be-unfortunate' soul is Ann Darrow. No one knows what they will encounter on this island and why it is so mysterious, but once they reach it, they will soon find out. Living on this hidden island is a giant gorilla and this beast now has Ann is its grasps. Carl and Ann's new love, Jack Driscoll must travel through the jungle looking for Kong and Ann, whilst avoiding all sorts of creatures and beasts. But Carl has another plan in mind.

King Kong 4K Review
Don't get me wrong here, I liked this film. It was spectacular, it had considerable emotional resonance, it wasn't a travesty.

Of course in reality a 25ft silverback gorilla would collapse under its own weight, and in many ways that's what has happened to the movie.

As others have noted, it is on the long side and would have benefited from resolute scissoring throughout. Just because you have the resources to show a 10-minute dinosaur stampede doesn't mean you actually have to do it, particularly when a 30-second scene would have told the story just as well. Throughout the movie, time is stretched in order to fit in all the effects - at one point several minutes pass between someone being struck by a spear and hitting the ground.

In addition I remain unconvinced by CGI generally. OK, this probably looks better than any other CGI movie so far, but I don't think we're in any danger of confusing it with reality yet. Rather, we have a spectacular and detailed cartoon.

It's ironic that while one of the central characters here is a combination of PT Barnum-style showman and Werner-Herzog-type visionary obsessive taking his cameras into the jungle, this "King Kong" itself is as far away from Herzogian 'realism' as it's possible to get. Not only do the CGI effects themselves (with the exception of Kong's facial expressions) fail to convince, the filmmakers also have people surviving unsurvivable falls, hanging onto logs and creepers in conditions where any human being would fall, etc. I know this is a Hollywood action movie staple, but it still jolts me out of any suspension of disbelief. OK, CGI is the only way we can have dinosaurs or giant gorillas, but keeping things as real as possible otherwise would help no end with the human side of the story.

Any time a film-maker puts a film-maker into his story it's necessary to consider the relationship between the two. On the one hand we have the studio-bound CGI-nerd making a movie about a seat-of-the-pants explorer-director. On the other we have the "showman" side of Carl Denham, as Driscoll points out, destroying that very "wonder" he sets out to capture by reducing it to vulgar spectacle. You have to ask yourself if that resonance wasn't at least in Jackson's mind when he wrote the theatre scene.

On the plus side, all the themes of the original are here and amplified, from the "we are the real monsters" (with added "Heart of Darkness" reference), through strong hints of ecological parable, to the genuinely tragic love of Kong for Darrow which leads directly to his capture and eventual downfall. The sadness in his eyes throughout is something to behold - as the last of his species he is doomed in any event, ironically it is his compassion which hastens his demise.