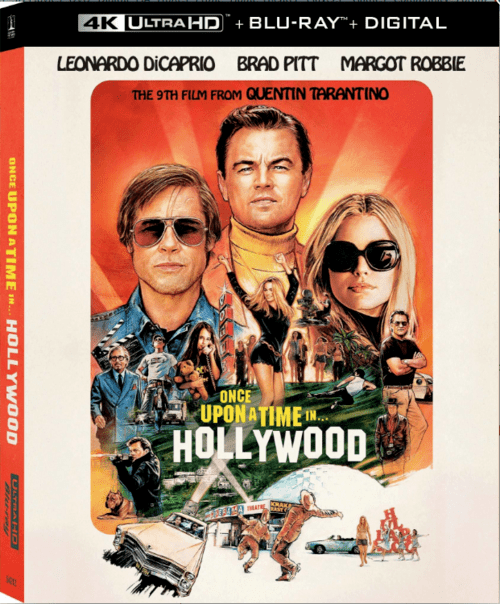 4k movies reviews
Tarantino shot his 9th film, first of all, for himself. He chose his favorite topic - something that always excited him the most - the movie. Why the 60s? Yes, because it was at this time that little Quentin spent all day fascinatingly watching films shot in real scenery, and not on the "greenback" in the same pavilion. Only acting and no computer graphics.

The impressions received in childhood are always sharp, because then the feeling of novelty haunts us constantly. That's why I love the 90s so much, and Quentin Tarantino the 60s.

And now the adult director took a present to himself - that mischievous boy from the 60s, excitedly watching TV. Quentin filmed a movie tale. More precisely, he created an alternative reality of his favorite time in Hollywood, tying up a plot in a tragic event.

Roman Polanski is not only a brilliant director, but also a person with an unusual and sad fate. In 1969, crazy hippies from the Charles Manson commune broke into his house, killed his pregnant wife (Sharon Tate), three of his friends, and wrote “pig” on the wall with blood. The causeless bloody massacre caused a shock among the peace-loving citizens, and Polanski finally lost her mind. The media regularly threw firewood into the fire, releasing accusatory articles, saying that if it were not for the rampant lifestyle of Roman, there might not have been a massacre. Nonsense!

In 1977, Polanski was accused of raping a thirteen-year-old model, which put an end to his American career. Miraculously, the court gave him only 3 months in prison. But when Roman came out, the judge abruptly changed his mind and decided to put Polanski for life. The director flees to France and continues to make films. In the USA, his road is closed forever, but the film “The Pianist” still gets an Oscar for best directing in 2002.

Tarantino takes as a basis the tragedy of Polanski's life, while simultaneously conducting the viewer a detailed excursion into the world of the golden age of Hollywood. This is the heyday of Kubrick’s career, the work of Fellini, the cult westerns of Sergio Leone, “Baby Rosemary” Polanski and other legendary events. And in all this luxury, the protagonist of the film, the star of the westerns of the 50s, Rick Dalton, eke out a miserable existence. His career is approaching sunset. Through the prism of the character of the hero, Tarantino shows us the problems of cinema of that time.

Rick has a prototype - a talented actor Bert Reynolds. He made friends with his stuntman Hal Neal, who was the prototype for Cliff Booth (Pitt character).

The role of Sharon Tate is played by Margot Robbie. Quentin showed her as an enthusiastic, but somewhat aloof girl.

Tarantino has a special approach to the masses. They are not driven by the desire to earn money, he just makes a movie, trying to fall in love with him as much as possible by the audience, without going along with them. Quentin makes films that you want to watch. Because his work catches not only with the plot, but also with a unique vision. His films are paintings that turn the TV room into a cinema museum. He is faithful to his stylistic devices, for which we (his fans) love him so much. This Tarantino postmodernism is our catalyst for aesthetic pleasure.

Therefore, when I hear that someone called this masterpiece film “boring,” I feel sad for the people. For the inability to appreciate the beautiful and for the lack of understanding of his genius. If you do not understand something, then at least do not pour mud on it. Indeed, if you try to understand all the allusions and metaphors, you can discover a lot of new things.

This is a wonderful and very deep film, which caused an aesthetic orgasm among moviegoers. Thanks, it was awesome. Perhaps I’ll look one more time. And then again. And further.

P.S .: a curious fact: mother named Quentin in honor of the character of the film (Quentin Asper), played by Bert Reynolds - the prototype of Rick Dalton. Coincidence? I don’t think so.