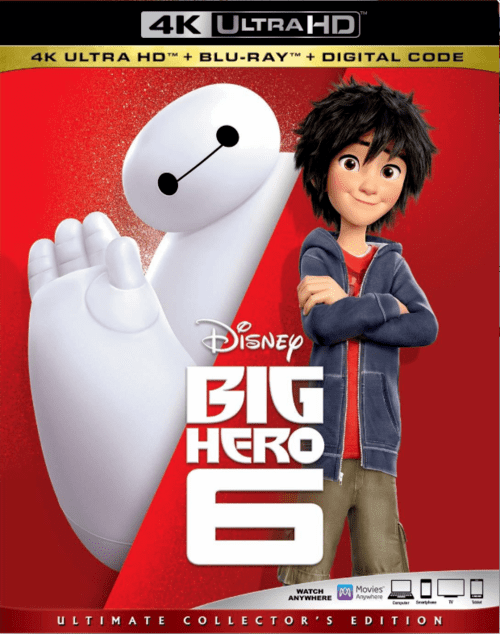 4k movies reviews
The hardest review of my life, because a few weeks after watching the new animated Disney movie, I could not decide whether I liked it or not.

On the one hand, I am still impressed by the thoughtfulness of the world where events take place. It can be seen that the artists were inspired by the works of Osama Tetzuki about Astroboy and Metropolis. At the same time, they considered it simply too easy to copy the Japanese city of the future and, combining the Eastern style with American life, created something of their own, unlike anything else. The result is obvious, the city is the first to catch the eye. All streets, neighborhoods, restaurants and other places catch their eye and are imprinted in memory for a long time.

And the design of the characters, as well as their characters are also on top. Unless Hani Lemon, a bit like Rapunzel and Anna from the latest studio work, turned out to be a bit of a passing hero.

Of course, the Beimax robot is the most memorable character, since the entire advertising company was built on this cute, good-natured character so similar to the panda and Totoro.

But with all these pluses, I just could not understand what was stopping me from saying: “It's just super!” And then I came across a concept art, exhibited on the network. Among all these unrealized ideas like the geisha minions of the villain, many scenes showing how close the brothers were, all their inventions and other scenes, it finally dawned on me that I did not like the cartoon - its incompleteness.

A few strong and catchy scenes, the scriptwriters too abruptly replace the unreasonable humor. In the best traditions of the transition from the death of Bambi's mother to singing birds, mourning is instantly replaced by a scene of a race for a clumsy robot, the disclosure of the death of a villain's own man is a sudden scene of salvation. Is it really so bad to give children a moment to sympathize with the heroes ?!

And here it is also striking that all the bright characters do not in any way contact the robot Beimax. And judging by one single scene of a conversation with the butler, such scenes would be much more interesting than the eternal stuffing of the poor fellow in all kinds of cracks and kung fu lessons.

Bottom line: A good overall film, which did not have enough completeness to become a genius.