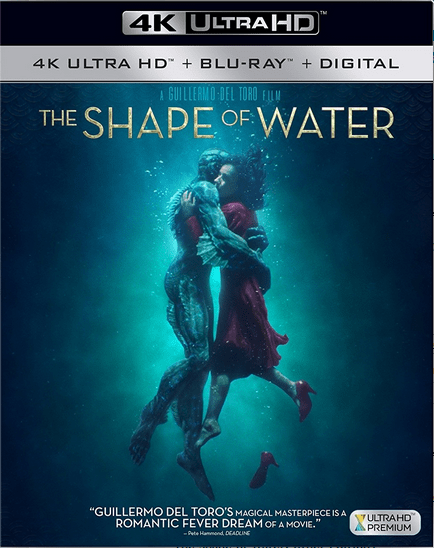 Story Movie
From master storyteller Guillermo del Toro comes THE SHAPE OF WATER, an otherworldly fable set against the backdrop of Cold War era America circa 1962. In the hidden high-security government laboratory where she works, lonely Elisa (Sally Hawkins) is trapped in a life of isolation. Elisa's life is changed forever when she and co-worker Zelda (Octavia Spencer) discover a secret classified experiment. Rounding out the cast are Michael Shannon, Richard Jenkins, Michael Stuhlbarg, and Doug Jones.

The Shape of Water 4K Review
Never really been a watcher of Guillermo del Toro movies, yet being a lover and liking movies that blend sci-fi and pay homage to classic monsters, I for sure had to check out this latest epic called "The Shape of Water". And this movie is a touching and moving film that's a blend of drama, romance, and adventure fantasy.

Set in the late 1950's early 1960's in Baltimore at a top notch government research lab this movie becomes a journey of escape and a journey of connection for two people who couldn't be more different. Sally Hawkins is Elisa a lonely and mute janitor who's only friends are her co worker Zelda(in a blunt and brash performance from Octavia Spencer)and her neighbor Giles(a wonderful Richard Jenkins). Plus Elisa puts up with verbal and mental abuse from her cold and mean boss Richard(the in grove Michael Shannon). However being alert and noticing things behind the scenes with eyes and ears pays off for Elisa.

Elisa slowly but surely begins a relationship of love and intimacy with a strange and mysterious sea like creature(something similar to the "Creature from the Black Lagoon"). And aside from this the film becomes a drama of twists and turns a need for escape and survival and you ask questions who can and who do you trust?

Overall this movie is a great escape of connection and a journey to love and belonging proving that happiness is possible for lonely and different types of people. "The Shape of Water" is clearly one journey that's sentimental, emotional, and heart touching as the film will leave you touched and moved with love and wanting peace for all.