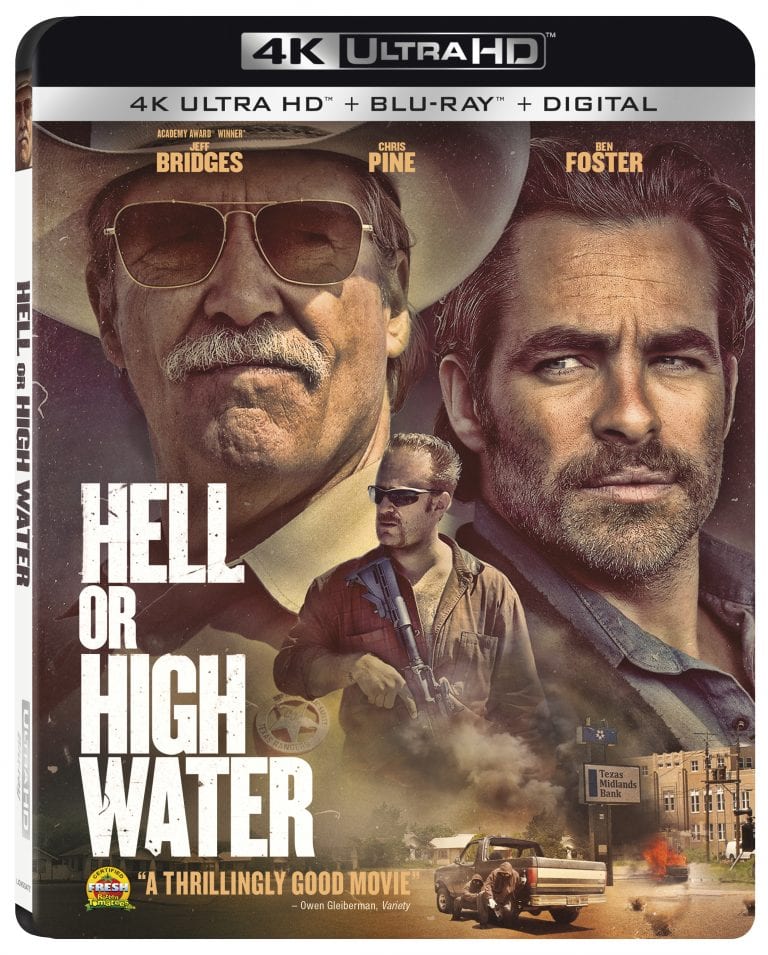 Story Movie
In Texas, after the death of his mother, the unemployed oil and gas worker Toby Howard is losing his ranch to the Texas Midlands Bank. Toby is divorced from his wife who lives with their two sons. When his brother Tanner Howard is released from the prison, they team up to rob agencies of the Texas Midlands Bank to raise money to pay the loan so that Toby may leave the real estate to his sons. Meanwhile the Texas Ranger Marcus Hamilton who is near retirement and his Indian descendant partner Alberto Parker try to anticipate the next move of the thieves.

Hell or High Water 4K Review
The American western seems to be slowly making a comeback in recent years. With films such as The Rover, Slow West and True Grit there have been some interesting and unique approaches to this old genre. Hell or High Water fits right in with these mentioned films by containing a lot of comedy, engaging characters, and no holds barred violence.

Chris Pine and Ben Foster as the bank-robbing brothers share great chemistry and draw sympathy from the audience with compelling performances. Jeff Bridges stands out however as the hardened cop tasked to track down the brothers. His racist slurs and aggravated man persona works perfectly with his gravely, yet genuine voice and he finds perfect timing in his comedic delivery.

The music, done by Nick Cave is also perfect. After crafting one of the greatest scores with Assassination of Jesse James, he gets pretty close to that here with very foreboding and meditative music. Especially right before the big showdown.

And when it all goes down, the film will have you on the edge of your seat. It doesn't hold anything back and people die out of nowhere. It's very realistic and is worth the tension filed build up.

Hell or High Water is a surprisingly great American western.