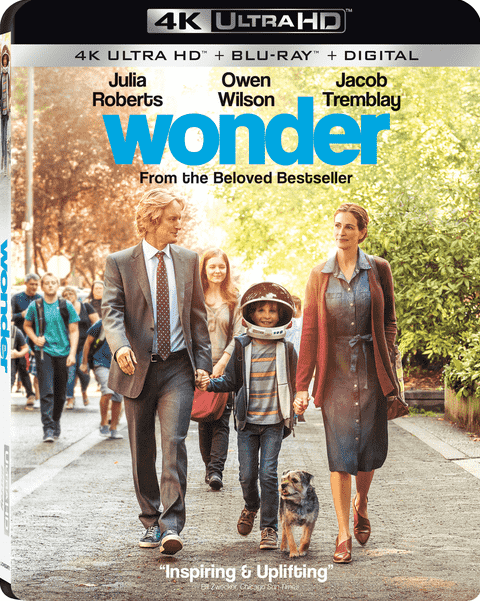 Story Movie
Based on the New York Times bestseller, WONDER tells the incredibly inspiring and heartwarming story of August Pullman. Born with facial differences that, up until now, have prevented him from going to a mainstream school, Auggie becomes the most unlikely of heroes when he enters the local fifth grade. As his family, his new classmates, and the larger community all struggle to discover their compassion and acceptance, Auggie's extraordinary journey will unite them all and prove you can't blend in when you were born to stand out.

Wonder 4K Review
Film of Choice at The Plaza Dorchester Tonight - Wonder. Today is world kindness day and a link appeared on Facebook offering free tickets at cinemas across the country to see a special pre-release preview of this beautiful film. Wonder is the story of Auggie Pullman who is born different. Home schooled, his mother feels it's time for him to enter mainstream education and he joins the 5th grade. People can be cruel and kids can be cruellest of all and Auggie struggles in a world where everyone stares and whispers and even bullies. It's not only Auggie who struggles however, as the film progresses we are told the story from different angles, that of Auggie himself, his sister, his sister's friend and his own new friend. All have issues which are both affected and unaffected by the way Auggie looks. This is a heartwarming tale, based on a New York Times bestselling book. Julia Roberts and Owen Wilson play the parents who love their son fiercely and ache for his anguish and rejoice in his successes as he finds his way in the world of the 5th grade. I urge you to go and see this, easy to watch and the characters are all endearing in their own way, even the bullies. I believe it's on general release at the beginning of December.