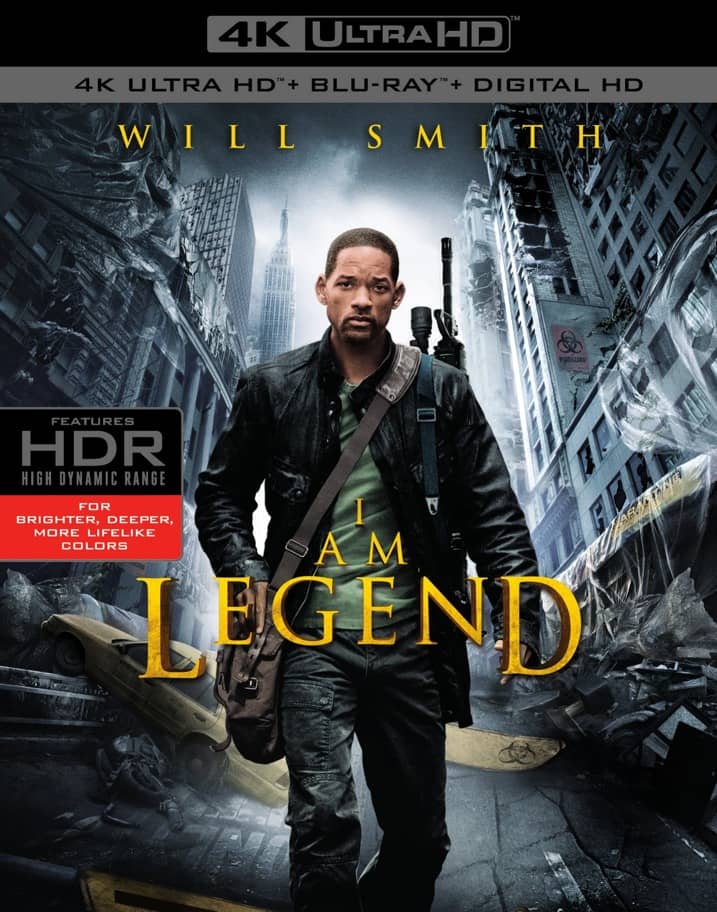 Story Movie
Robert Neville is a scientist who was unable to stop the spread of the terrible virus that was incurable and man-made. Immune, Neville is now the last human survivor in what is left of New York City and perhaps the world. For three years, Neville has faithfully sent out daily radio messages, desperate to find any other survivors who might be out there. But he is not alone. Mutant victims of the plague -- The Infected -- lurk in the shadows... watching Neville's every move... waiting for him to make a fatal mistake. Perhaps mankind's last, best hope, Neville is driven by only one remaining mission: to find a way to reverse the effects of the virus using his own immune blood. But he knows he is outnumbered... and quickly running out of time.

I Am Legend 4K Review
The 1954 sci-fi/vampire novel "I Am Legend" by Richard Matheson has now been filmed three times: as "The Last Man On Earth" in 1964 originally scripted by Matheson himself (which I have never seen), as "The Omega Man" in 1971 without the vampire elements (which I have viewed three times), and now with the original title and expensive sets and special effects. This time the seemingly sole survivor of the worldwide pandemic Robert Neville is played by Will Smith who is an actor with real charisma and charm and considerable box office appeal who has beefed himself up for the role.

The main strength of this version is the location shots in a deserted New York City (a move from the Los Angeles of the book and earlier films) and, although the filming of these scenes apparently caused traffic chaos and much anger for local residents, they chillingly set the tone for this dystopian thriller. To see the silent streets around Times Square or South Street Seaport or the lone scientist fishing in the Metropolitan Museum of Art or playing golf on the "USS Intrepid" is to view this heaving metropolis as we have never experienced it before. The German shepherd dog who is Neville's sole companion deserves an honourable mention for showing greater thespian skills than most of the extras and stunt men.

The principal weakness of the movie, however, is the realisation of the surviving victims of the virus. The CGI characters are almost as silly as they are scary but, above all, they are presented as more animalistic than human. "The Omega Man" handled these characters much better presenting them as sad as well as scary. The other serious fault is the lack of clarity in the narrative - at times, it is simply unclear what is happening and why and a longer director's cut would be welcome. Finally the references to Ground Zero and God may play well with American audiences but will not be so resonant to audiences elsewhere in the world.