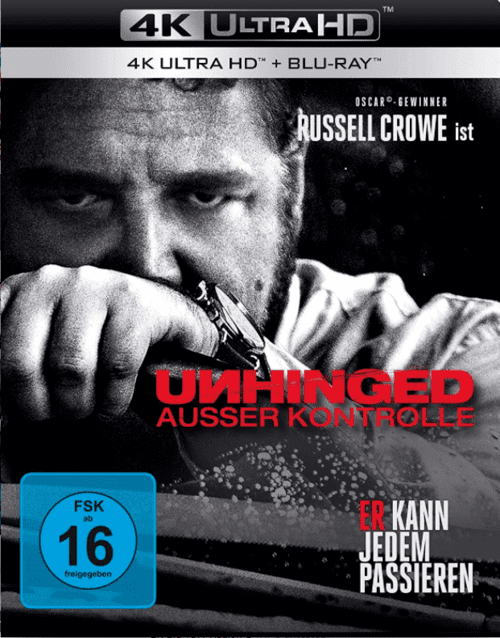 USA Movies / Thrillers 4K
Producer: Derrick Borte
Cast:Russell Crowe, Caren Pistorius, Gabriel Bateman, Jimmi Simpson, Austin P. McKenzie, Juliene Joyner, Stephen Louis Grush, Anne Leighton, Devyn A. Tyler, Sylvia Grace Crim, Vivian Fleming-Alvarez, Samantha Beaulieu, Lucy Faust, Scheryl W Brown, Michael Papajohn.
IMDB 6.0
File Size 47.08 GB
Film description
Taken from IMDB.COM
Single mother Rachel is in the process of divorce, and this day has not worked out for her. She overslept and, taking her son to school, got into a big traffic jam, and the only client left after the closing of the beauty salon fired her for being late. Trying to take a shortcut, Rachel got into a fight on the road with a random motorist and then refused to apologize. This man has already committed a high-profile crime the day before, and he promises to arrange a really terrible day for the impudent one.

4k movies reviews
The harsh, cruel and dynamic thriller 'Furious' is ready to please everyone who misses the cruel tinsel on the big screen. Literally from the very first minutes, the authors immerse the viewer in an atmosphere of approaching horror, revealing in all details the physical and psychological essence of the main antagonist. It is no secret that it is he who is the driving force of the plot development, since he constantly provokes, motivates and controls his victim in the direction he needs, like a cat playing with a defenseless mouse. But, as you know, even the weakest can sometimes give a harsh rebuff, and this is exactly what this picture is about, where, in the course of the process, the creators also try to convey to the viewer an important problem of modern society associated with groundless aggression and ill-mannered rudeness of ordinary people towards each other. a friend, whether it's on the road, in a store or just on the street. Unfortunately, the global statistics looks very depressing and the worst thing is that the numbers do not decrease with each new year.

Of course, a straightforward and simple story does not pretend to be a highly artistic creation, but at the same time, within the framework of the genre, everything looks very high quality. The scenes of violence are shown realistically and in close-up, as if each blow and injury is felt not only by the heroes of the picture, but also by the audience in the cinema thanks to the volumetric sound effects, ominous music and pinpoint camera work that reflects the entire horror of what is happening. It is especially worth noting the impressive appearance of Russell Crowe, who played the role of a merciless tyrant, who, against the background of a small weak woman and her child, looks like a real giant with powerful fists capable of breaking a human skull with one blow.

Without false modesty, we can safely say that the plot hooks instantly and in all seriousness, although the main part of the cinematic narrative also lacks various surprises and original scenario chips, so do not rely on just one and a half hour chase around the city. This is a full-fledged and dynamic action thriller with all the ensuing consequences, where there will be car races, impressive destruction, and deadly games in which the heroine will have to make a difficult choice to save family and friends.

The only thing to which one can make a claim is the final fight, which according to all indicators should have been the most spectacular and even a little long in the spirit of 'Halloween' with the unkillable Michael Myers. But here everything turned out pretty quickly, succinctly and without the necessary long-lasting aftertaste. But in any case, the film turned out to be excellent in the best traditions of genre cinema. Happy viewing.