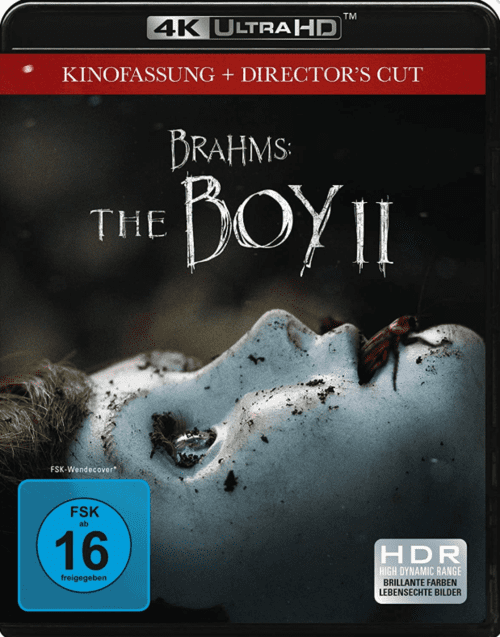 USA | China | Canada | Australia Drama 4K / Horror 4K
Producer: William Brent Bell
Cast:Katie Holmes, Christopher Convery, Owain Yeoman, Ralph Ineson, Daphne Hoskins, Keoni Rebeiro, Joely Collins, Oliver Rice, Anjali Jay, Natalie Moon, Karl Mercer.
IMDB 4.6
File Size 38.17 GB
Film description
Taken from IMDB.COM
9-year-old Jude witnessed an attack on the mother of the robbers who crawled into their house, and has since stopped talking. Trying to help the child, parents decide to move out of town, and their choice falls on the old Hillshire mansion. Nearby in the woods, Jude digs out a strange doll, almost the size of him. The boy does not part with a new "friend" named Brahms and is soon recovering. Parents are very happy, because they do not suspect what this sinister friendship will turn into.

4k movies reviews
Mostly I watch movies, simply because I want to watch and enjoy what I see. I do not set myself the goal of comparing with past parts, if there are several, well, or just looking for jambs. If something is, then it will pop up by itself. Therefore, I am constantly surprised when some good movie has a lot of negative reviews, and even when they just find fault with everything.

So in the sequel to "Dolls" I just wanted to see the sight - and I saw it. I won’t argue - there’s nothing new, and there wasn’t any secret here, everything lay on the surface, we could only see everything that was happening. The film is very easy to sweep in its timing, completely without straining your head. If in the first part there was a lot of incomprehensible and just a secret was present, then there is nothing like that. From the very beginning, the Brahms doll seems to us and all aspects of the “puppet horror” are shown right away - and moving from place to place, and moving eyes, and the child’s addiction to the doll. But for me, viewing was still interesting.

First of all, I liked the picture of the film, a bright and juicy image increased interest in the film. Also, the scene, the dark forest and the main mansion, with secret passages and various beautiful views, also captivated the imagination. Despite the immediately revealed story and the lack of new facts and additions to the first part, I liked everything. Of course, we saw puppet horror films and more interesting, in terms of atmosphere and intrigue, but here I liked the video sequence first of all.

The acting was also very good, first of all it concerns Katie Holmes, in fact it was the most in the frame. Natural fear was on her face, a constant misunderstanding of the situation was clearly reflected in her gestures and facial expressions. I am not particularly familiar with this actress, but here she was good. There are no complaints about the young actor Christopher Convery, his character should be exactly the way he portrayed him - frightening, silent, with a mysterious look. Maybe shiver to take from one kind of child!

It is difficult to single out any thoughts on the film, after all, this is not quite the movie that is filled with morality and other consequences. A child is a child, and also with a psychological trauma! We succumb to their whims, and sometimes we just slip them what they want, just to be behind us. In this picture, the boy’s parents are very caring and loving people, ready for anything for the sake of his son’s recovery. But sometimes excessive guardianship and care play a cruel joke and we just don’t notice how terrible things start to happen. In this film, we are talking about a mystical killer doll, in real life it can be anything, including drugs, Nazis and other bad consequences. But do not forget that our children are everything, so you can’t stop loving them even for a second!

Simple and tasteful - that's how I characterize this picture. I did not expect something powerful and large-scale, but I got a good modest horror, albeit of the same type and to a greater extent, walk-through, and until the work has become more than ordinary and standard, interest will continue to remain. I will not recommend it, because after reading the reviews I realized that few people saw anything good, so consult your inner “I” and decide to watch it yourself!