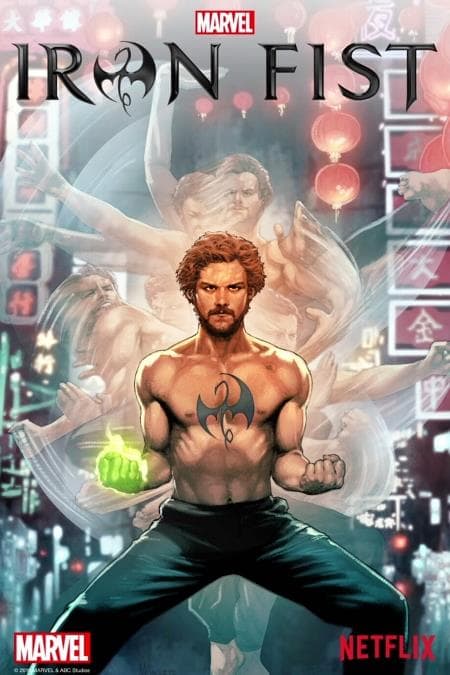 USA TV Series 4K
Producer: Scott Buck
Cast:Finn Jones, Jessica Henwick, Jessica Stroup, Tom Pelphrey, David Wenham, Wai Ching Ho, Barrett Doss, Rosario Dawson...
IMDB 7.1
File Size 21.6 GB
Film description
Taken from IMDB.COM
A young man is bestowed with incredible martial arts skills and a mystical force known as the Iron Fist. Danny Rand returns to New York City after being missing for years, trying to reconnect with his past and his family legacy. He fights against the criminal element corrupting his world around him with his incredible kung-fu mastery and ability to summon the awesome power of the fiery Iron Fist.

All the same, each series - a different director does not always lead to good.

First of all. I am absolutely ridiculous of all those accusations of critics who poured into the series before the premiere.

And now more. I watched this series for a long time and not at a glance. Yes, it is really worse than the previous ones, which were dispersed to the fourth series and it was difficult to come off further. But.

It's not for the reason that the actor is not Asian or badly shown kung fu. About which 90% of the white inhabitants of the Earth have no idea. If this is not a category B movie, then in addition to kung fu, other components are important in the artistic product.

And then surprisingly a lot of very good.

1. This series showed the most profound disclosure of the characters of the characters. Jessica Jones or Daredevil do not stand close to him. This is something amazing. Characters are not cardboard. They are alive and empathize with them. You understand them.

2. The antagonists are chic. And Harold and Madame Gao. They feel duality and evil and nezlo and what are the intermediate states. They are interesting. In the best traditions of Loki in general. Because it was difficult for Kingpin to empathize, even though the character was made perfectly. Well, the third antagonist personally was of little interest to me. We introduced it stylistically and late.

3. Turns plot do not give boredom.

4. The series really qualitatively lays the foundation for the Defenders. Creating an understanding of the world that is shown to us. Conditionally Daredevil 2 season I personally left questions that were resolved.

Now for the minuses:

1. The character of Renda is openly stupid. I really do not like being stupid and it repels me. The series about the stupid hero loses in everything. Rend is spherical dumb. This TA male with the skills of kung fu.

2. I do not understand what's happening with the layout of the series. The toli took off too much toli cut out a lot. Glued series is very bad.

3. Story holes in abundance. First of all around Harold. His murders and his deaths. Strangely enough, Hand is following him. And how does it follow if he swears in the open in the apartment ?. The meaning of his seclusion is not clear. What in general was the point of sitting in confinement, and not to do plastic surgery for example and join the board of directors Rand under a strange guise. It would be much more effective. Many questions.

4. The narrative narrative changes from the first series to the last, and characters change, which should not have changed. This is a plus for working on the characters of the series, but let's say Gao. At first it is a cruel and powerful mistress, very clever. More cruel than she in Daredevil. Which is not surprising. She's not in prison. Yes, the only one who did not suffer from the company of the shadow owners of the city. At the end of the Iron Fist, this is a kind, almost harmless granny. She has only a small weakness. She poison poisons and drugs does. What a trifle. But a person is a good character made famous. For two serials he was discovered and it's fine. But such an evolution does not happen. It seems so to me.

I can not characterize fights and everything connected with martial arts. But. Is it really necessary entertaining series for the comics. Qualitative martial arts? Throw it is not even an action movie.

Someone will say that a lot of snot and will be right. They are really too much. Is the actor in the main role right? It's also a question. He's cute. If the main character wanted to make gay, then maybe he would not look bad. But charisma is not at all.

From observations. It seemed to me that it was more logical to show the resurrected Electra here. At least because they are both living weapons. This would remove part of the inflated story load from Defenders.