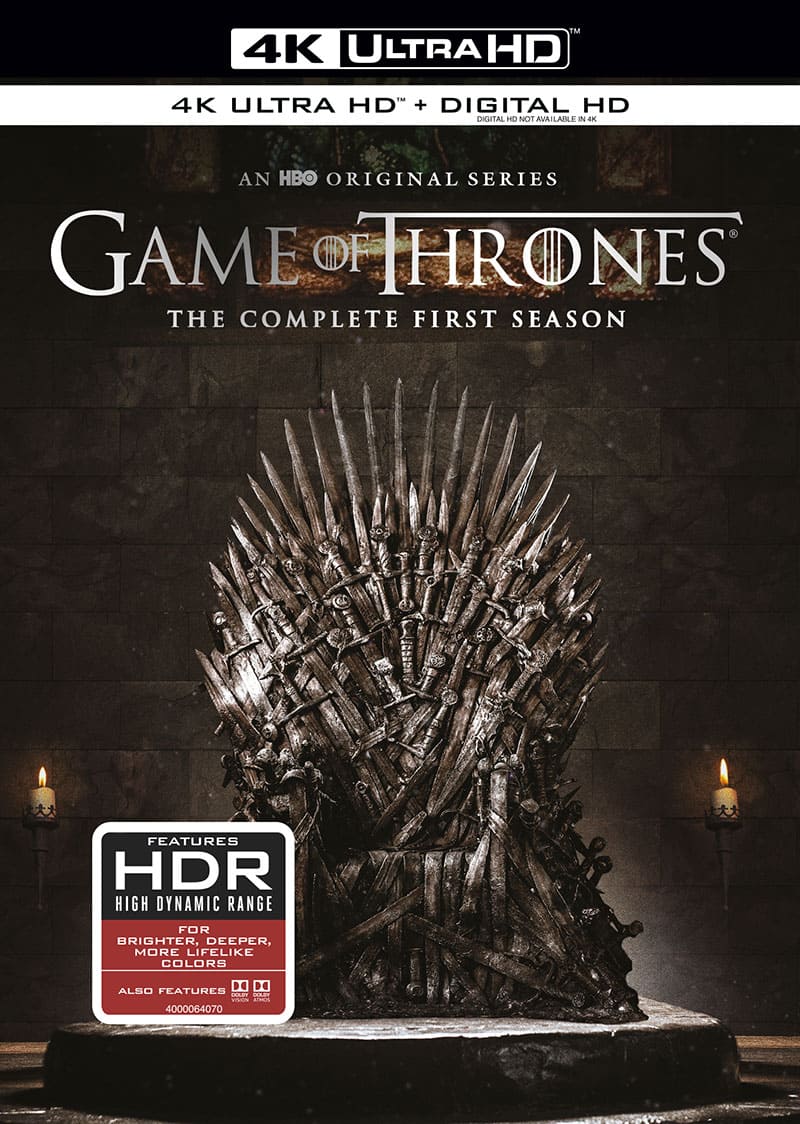 USA | UK TV Series 4K
Producer: David Benioff, D.B. Weiss
Cast:Peter Dinklage, Lena Headey, Emilia Clarke, Kit Harington, Sophie Turner, Maisie Williams, Nikolaj Coster-Waldau, Iain Glen Iain Glen, Alfie Allen, John Bradley, Aidan Gillen, Conleth Hill, Gwendoline Christie, Isaac Hempstead, Jerome Flynn, Rory McCann, Julian Glover, Charles Dance, Jack Gleeson, Michelle Fairley, Ian McElhinney...
IMDB 9.5
File Size 295 GB
Film description
Taken from IMDB.COM
The most popular TV series to date, now available in the TV Series 4K category. Everyone was already waiting, I was asked to download the Game of Thrones in 4K many times, and now you can download, and enjoy watching the movie in Ultra HD. Description: The time of prosperity comes to an end, and the summer, which lasted almost a decade, fades. Around the center of the power of the Seven Kingdoms, the Iron Throne, a conspiracy is maturing, and at this difficult time the king decides to seek support from Eddard Stark's friend of youth. In a world where everyone - from the king to the mercenary - rushes to power, weave intrigues and are ready to stab a knife in the back, there is room for nobility, compassion and love. Meanwhile, no one notices the awakening of darkness from legends far in the North - and only the Wall protects the living south of it. Game of Thrones Season 1 in 4K Ultra HD 2160p for download.

The series is extracted from the blu-ray disk - Game of Thrones 4K: The Complete First First Season Blu-ray

Game of Thrones Season 1 series 1-11 in 4K Ultra HD
S1, Ep1
8 Sep. 2011 Winter Is Coming
Jon Arryn, the Hand of the King, is dead. King Robert Baratheon plans to ask his oldest friend, Eddard Stark, to take Jon's place. Across the sea, Viserys Targaryen plans to wed his sister to a nomadic warlord in exchange for an army.

The Kingsroad S1, Ep2
24 Apr. 2011 The Kingsroad
While Bran recovers from his fall, Ned takes only his daughters to King's Landing. Jon Snow goes with his uncle Benjen to the Wall. Tyrion joins them.

Lord Snow S1, Ep3
1 May 2011 Lord Snow
Lord Stark and his daughters arrive at King's Landing to discover the intrigues of the king's realm.

The Wolf and the Lion S1, Ep5
15 May 2011 The Wolf and the Lion
Catelyn has captured Tyrion and plans to bring him to her sister, Lysa Arryn, at the Vale, to be tried for his, supposed, crimes against Bran. Robert plans to have Daenerys killed, but Eddard refuses to be a part of it and quits.

A Golden Crown S1, Ep6
22 May 2011 A Golden Crown
While recovering from his battle with Jaime, Eddard is forced to run the kingdom while Robert goes hunting. Tyrion demands a trial by combat for his freedom. Viserys is losing his patience with Drogo.

You Win or You Die S1, Ep7
29 May 2011 You Win or You Die
Robert has been injured while hunting and is dying. Jon and the others finally take their vows to the Night's Watch. A man, sent by Robert, is captured for trying to poison Daenerys. Furious, Drogo vows to attack the Seven Kingdoms.

The Pointy End S1, Ep8
5 Jun. 2011 The Pointy End
Eddard and his men are betrayed and captured by the Lannisters. When word reaches Robb, he plans to go to war to rescue them. The White Walkers attack the Wall. Tyrion returns to his father with some new friends.

Baelor S1, Ep9
12 Jun. 2011 Baelor
Robb goes to war against the Lannisters. Jon finds himself struggling on deciding if his place is with Robb or the Night's Watch. Drogo has fallen ill from a fresh battle wound. Daenerys is desperate to save him.

Fire and Blood S1, Ep10
19 Jun. 2011 Fire and Blood
9.5 (21 637) Rate
With Ned dead, Robb vows to get revenge on the Lannisters. Jon must officially decide if his place is with Robb or the Night's Watch. Daenerys says her final goodbye to Drogo.

4K movie reviews
About this series written a lot of praise reviews. With the majority, I certainly agree. I praise and strong direction and a terrific soundtrack. Magnificent landscapes, looked by us in frames. Computer graphics - a big bow. Dragons are magnificent (though not quite the same as we see them in the book, but still stunning). And of course the scenario ... brilliant adoption of the script. Bravo!

But now I want to talk about, in my opinion, the most important "plus" of the series "Game of Thrones 4K". You probably already guessed what I mean. The cast of actors. An excellent understanding of his character, and with a good and a bad side, climbing, so to speak, into his skin raises the series to a new level. Brilliant actors, as if, were born just for their characters, it is in this series. And I will try to evaluate the work, in my opinion, of the best actors.

Emilia Clark - Khalisi Deyneris Targarien. A real find in the vast world of the actor's ocean. How "devilishly" it is to look at the reborn girl, who was forced to marry by a brother, for an unshaven, huge barbarian. She falls in love, loses love, grieves and finally becomes the "Mother of Dragons". Emilia, bravo!

Peter Dinklage - "Bes" Tirion Lanister. Another finding of the producers, which "played five." Thank God that it did not occur to the creators to create a computer character for this place. Found an unknown dwarf, who delightfully played the most ambiguous character of the entire saga. Peter, in one of the interviews, admitted that he always complexed for his growth and did not even guess that this remarkable feature of his body would make him a world-class star. And yet, huge thanks to the creators, for not being deprived of Tirion's nose, after the battle on Cherovodny, limited only by scar.

Michelle Fairley - Keitelin Stark and Lina Hidi - Cersei Baratheon. I decided to write about them both at once, because they are, in fact, very similar characters: they are both mothers, both married not by desire, but by coercion, and both were early deprived of their husbands. Although the circumstances of the death of the spouses are very different.

Aiden Gillen - "Little finger" Pitir Beilish. Bravo! Outstanding game of this actor, left an imprint in the brain of all fans of the series. This is exactly what the little finger should be: cunning, greedy, the owner over a coin, with his beard and stabbing, green eyes.

Jack Gleeson - King Jeffrey Baratheon. If you conduct a survey "Who, in the series" Game of Thrones Ultra HD 2160p", you love the least", then Jofri will definitely take the first place. And for that, Jack Gleason - honor and praise. Just marvel at how this seventeen-year-old boy was able to show on the screen a mentally unbalanced and extremely cruel youth who, by no means, should not have been king.

Macy Williams - "Wolf" Arya Stark. Another young representative of the cast of actors, "overplayed" by her colleagues, is much older than her. Not beautiful and not neat, waving a sword-stick, fighting with a commoner boy. Arya, who was written on the family and fate was given, to become a lady, wife of whatever be a lord. But she did not need it for herself. She would have been running around the woods all her life or fighting in the war. "I'm such a daredevil in my life," Macy says in an interview.

Rory McCann - "The Dog" Sandor Kligan. For the role of the ugly "no knight", in the terrible scars-burns left by his own brother, whoever could come up better than McCann. For constantly drinking, spiteful, and true (quite justifying his nickname) hero, so clearly shown on the screen, Rory McCann, my separate "thank you."

Charles Dance - Tywin Lanister. If you recall the above, the survey "Who, in the series" Game of Thrones 2160p ", you love the least", it was I who would give this character a solid second place, and would overtake his Jofri, only a small fraction. This is an excellent actor, we have known for a long time from such pictures as "The Last Movie Hero", "Golden Child", "The Pool". But in the series "The Game of Thrones", he showed that he really is a professional of his generation. The cunning, insidious and infinitely rich lord-father Taywin Lanister, is the embodiment of evil in the whole saga. And to actor Charles it was remarkably possible to show it.

Jerome Flynn is a mercenary Bron. Still, I wanted to mention this not very significant character, but very significant acting game. A great fighter, who in the future won the title of lord. Lover of women, booze and money. Somewhere funny and very charismatic hero. Now, it seems that no one can show Bron better than Flynn.

And this, only ten of a very large number of actors who excellently "laid out" on the set of a remarkable series "Game of Thrones UHD."

In the end, I want to congratulate all lovers of the beautiful cinema, with the long-awaited release of the fourth season of the "Game of Thrones 4K". The most sensational series of recent years.

Release of the first season of the game of thrones 4k for download - site 4K-HD.CLUB
Within 24 hours will be added all the series

It was decided to add all the seasons of the Game of Thrones in HD 1080p. You can download them from the links below:

Series 8 season will be added on the day of release. At the moment there are the last 6 series of games of thrones.