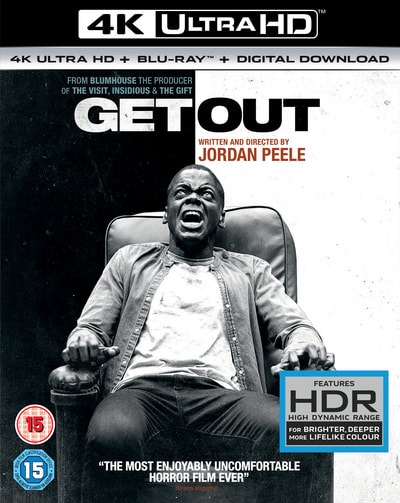 Story Movie
Chris and his girlfriend Rose go upstate to visit her parents for the weekend. At first, Chris reads the family's overly accommodating behavior as nervous attempts to deal with their daughter's interracial relationship, but as the weekend progresses, a series of increasingly disturbing discoveries lead him to a truth that he never could have imagined.

Get Out 4K Review
Let's clear the air about this film. It's not a horror film. It's not a comedy. What it is, is a suspenseful thriller of the highest level, worthy to be compared to Hitchcock caliber. The humor is there, along with a few horror scenes, but not enough to overshadow the main theme of the story. The film hits all cylinders with almost no misfires. As far as complaints that the film is racist, it is not. It would work just as well with an all-black or all-white cast. Those complaints are from people who are uncomfortable with black people or interracial relationships and are letting it distract them from the narrative of the film. I most certainly hope that it reaches the wider audience that it so richly deserves.