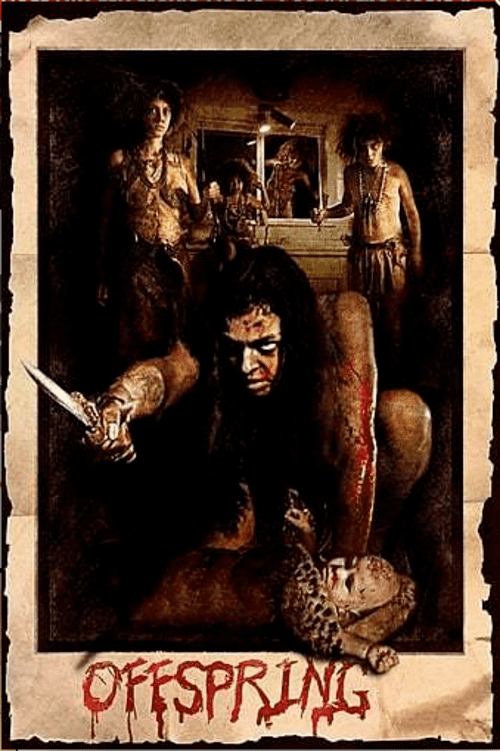 4k movies reviews
Offspring first? What about Off Season? Well, I've read on the Offspring message board that the reason why Offspring was chosen for film before Off Season is because of some rights issue. There were probably a couple skirts who were not being paid as much as the hard-working durable men, so they made a fuss. Eh, whatever.

But enough of that garbage, let me tell you a little something about Offspring, the latest Jack Ketchum work brought to celluloid. Well, it wasn't much. Actually it's as average as average gets.

The flick revolves around the.....what's the word...ya know, children, er, no....products....ehhh. Offspring revolves around the...leftover brood (that works!) from Off Season and these rabid savages aren't done hassling the surrounding community. This go around the young savages have this idea that a regular baby will help them somehow. So that's the target while they bite, chomp and stab everyone they can. I really didn't see the logic there since they had their own baby, but I think they mentioned something about that theirs was cursed or haunted. I don't really remember as I was focusing more on the the ridiculous acting by the savages. Roooaaaarr!! So yep, it's basically a fight for your life type flick. Which is fine by me.

My issue isn't with the story. It's with just how plain old uninspiring it all felt. When it comes down to awesome horror writers, Mr. Ketchum is the man. He writes some awesome stuff. But almost all of his flicks have been severely lacking, with Red being the best. And this is no different. The acting is really just so damn noticeable. It's just flat-out amateur. It's not awful in the sense that you hate the movie because of it, but it is at times cringe worthy.

And what's most strange about this film is that Ketchum wrote the screenplay. And by God, I can't tell if it's just the amateur acting that makes the writing seem poor, or it's the writing itself. The more I think about Offspring the more I'm thinking the actors aren't to blame. Sure they stunk, but I hate to say it but Ketchum's screenplay writing isn't up to snuff. I also throw a lot of the blame on the director as well.

Even though I say the movie isn't anything special, cause it ain't, but it's not totally a mess either. There's some pretty brutal violence on display. And there's even some nudity to boot. I'm also a fan (sucker) of the wilderness type setting, and this has a cave setting, a beach setting, forest setting.....so it looks nice.

But for all the child violence scenes that gives you that quick moment of joy, there's that scene of chit-chat that makes you roll your eyes. The flick is as average as it gets, but at the same time it's still a Jack Ketchum movie, and that's reason enough to watch it.