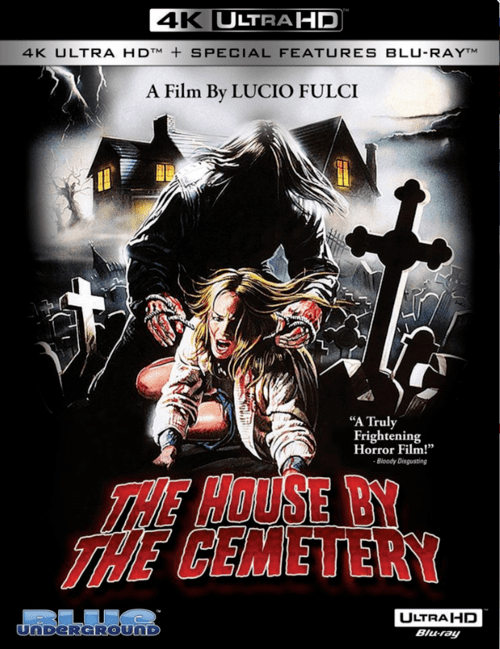 Italy Movies / Horror 4K
Producer: Lucio Fulci
Cast:Catriona MacColl, Paolo Malco, Ania Pieroni, Giovanni Frezza, Silvia Collatina, Dagmar Lassander, Giovanni De Nava, Daniela Doria, Giampaolo Saccarola, Carlo De Mejo, Kenneth A. Olsen, Elmer Johnsson, Ranieri Ferrara, Teresa Rossi Passante.
IMDB 6.2
File Size 51.89 GB
Film description
Taken from IMDB.COM
Old films in the new 4K processing, revising these films you will feel something new. All 4k ultra hd full movies are available for download. Husband, wife and little son move from New York to Boston and live in a house on the edge of the cemetery. Once upon a time, the mysterious Doctor Freidstein lived here, whose grave is in the center of the house. At night, the inhabitants of this place are disturbed by mysterious noises coming from the basement. The head of the family takes courage and opens the basement door, but it would be better if he did not.

4k movies reviews
No one will ever know
Are children monsters ...
Or monsters are children ...

Lucio Fulci - an Italian director, creator of many films of the "Zombie" direction, has always differed from other directors in a rather inadequate and extraordinary view of films. Many films involve the viewer, immerse themselves in themselves and do not let go until the very end. Others, at the same time seem boring and drawn-out, but at the same time traits of individuality, originality, uniqueness are visible in the films ... Through the efforts and efforts of Mr. Fulci, a large number of films have been created, but only a few can safely be called masterpieces ...

In the early 1980s, horror films were in great demand. The audience demanded adrenaline, fear, blood and the sharpness of the plot ... the 80s can rightfully be considered the era of "Italian monsters". Italy did not shoot like America or Germany.

Films of Italians have always been distinguished by restraint in the plot, the extraordinary coldness of each frame, amazing realism ... Remember even "Cannibals Hell". From everything they saw, the public, amazed by especially bloody and cruel scenes, believed in it as in the present, and as a result, the director had to prove his innocence and innocence in court ...

And in 1981, the new work of the great master of horrors Lucio Fulci, "House at the edge of the cemetery", was released on the screens of cinemas. One name already carries something mystical and gloomy ...

At that time, it was common to shoot three or even five-minute commercials for a film and put in there not only the most interesting and best moments of the film, but also show most of the murders. This is in our time, when in advertising we see a hint of murder or the very moment of reprisal against the hero, we will no longer be so interested and scared when it comes to his turn. But at the time, it even attracted the public. The viewer immediately runs to the cinema for a new portion of nightmares ... What they saw there, I think they will remember for a long time, and maybe for a lifetime ...

Viewers will see the story of an ordinary family that has moved to a new place of residence. They will see strange phenomena and inexplicable things, they will face the terrible past of this building, meet eye to eye with evil and will try to fight it until the very end ... Until the end, which, as it seems, cannot be avoided ...

On the one hand, the story is very simple. It may even seem that Lucio Fulci took the most classic situation and began to try to make his own unique nightmare story out of it ... All his attempts eventually brought great success to the film. The way he shows us fear is amazing ...

Fulci chose a little boy for one of the main roles, looking into whose face we can see a little angel with large and childishly shining eyes ... When we see this helpless child in a dangerous situation or completely surrendered to a feeling of fear, we ourselves want to quickly run there, pick up cover him with a blanket, warm and calm him .. There is nothing worse than a child's fear ... The fear of seeing what most people have not seen in their entire life as a child. It's awful, and Fulci presents everything to the viewer in this way ... Realistic, sensual, deep and very atmospheric ....

Great scenery and a great location for filming. When you were little, you leafed through encyclopedias or books, which told about creepy houses inhabited by ghosts and various evil spirits ... So in the film "Night at the edge of the cemetery" the viewer seems to find himself in one of these houses, which he was so afraid of as a child ... Indeed, in some places it is filmed so that everything that happens on the screen looks like a terrible child's dream. Very dark rooms, scary and heart-beating creaks from the basement and the second floor, glowing in the dark like two yellow balls of cat's eyes….

In this film, an unusually tragic and sad ending, which is practically not found in Fulci's films ... Here the sensuality and emotionality of the protagonists reaches their professional maximum ... There is something that is not in many films of the past and present ...

I would also like to highlight the excellent performance of the beautiful and talented Katriona McCall ... She shone in many of Fulci's films, and in all films he dealt with her in the most sophisticated ways ... In "House at the End of the Cemetery" she is extremely gentle, feminine, soft, worried and sensitive ...

And in the end I would like to note that "House on the edge of the cemetery" is one of the best films by Lucio Fulci ... High ratings from the audience, special recognition from critics and special attention to this work. And this is absolutely deserved ...

This film does not need to be looked too deeply. You don't need to find fault with him and count all his insignificant cliches and inconsistencies .. You need to feel him. You have to watch it and be surprised. To be surprised by the masterful direction and the excellent plot that gave birth to a real classic ...