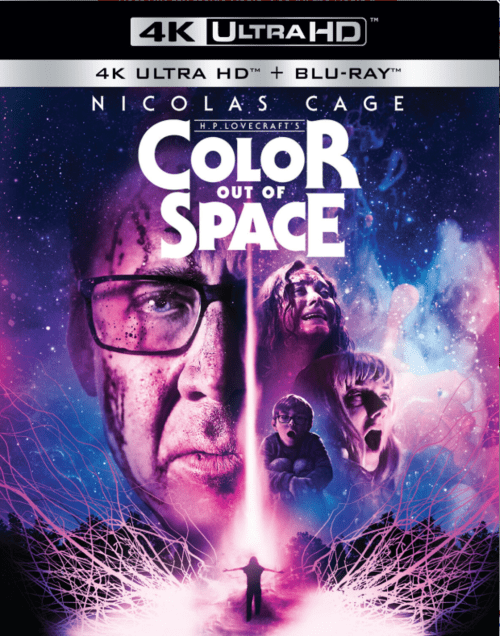 Malaysia | Portugal | USA Movies / Horror 4K
Producer: Richard Stanley
Cast:Nicolas Cage, Joely Richardson, Madeleine Arthur, Elliot Knight, Tommy Chong, Brendan Meyer, Julian Hilliard, Josh C. Waller, Q'orianka Kilcher, Melissa Nearman, Amanda Booth, Keith Harle.
IMDB 6.2
File Size 49.02 GB
Film description
Taken from IMDB.COM
Farmer Nathan Gardner with his wife and three children lives far from civilization. Once a meteorite falls near his house, the next day it disappears, and now unusual flowers grow around the place of the fall, and television and mobile communications work with interference. The hydrologist who came to check the local water is sure that it is not worth drinking, but members of the Gardner family do not attach much importance to this and soon begin to behave very strangely.

4k movies reviews
Howard Phillips Lovecraft is rightfully considered one of the most mysterious writers of the 20th century, having won the favor of an entire army of fans, and then gone into oblivion, leaving hundreds of puzzles to themselves. It is known that Lovecraft was in no hurry to share information about his person, in his works there were a lot of frightening, sinister details that literally struck the imagination. Someone really believed that the writer opened a portal to other worlds, while others thought that he was just crazy. One way or another, Lovecraft has become a real event in world literature and I personally like his stories even more than any other bestseller from Stephen King.

In 1927, Lovecraft wrote one of his most significant works, the mysterious, shocking and really creepy “Color from Other Worlds”. According to the author himself, he considers this story the best of what he has ever managed to create. The first film adaptation of the sinister science fiction story appeared at the box office many years after the death of the writer, but she did not really impress me. Subsequently, we saw several more options for “Colors from Other Worlds,” but I can name only one of the most interesting and truly scary of them. And we are talking, of course, about the 2019 version with Nicholas Cage in the lead role.

The plot of the film takes place on the remote farm of Nathan Gardner, where he lives with his wife and children. Nothing foreshadowed the heroes of trouble, when a real meteorite fell right near their house! Naturally, such an event could not fail to attract the attention of the family, but they did not even suspect what would happen next ... Soon after the fall of a heavenly stone, a certain glow began to appear in the vicinity of the house, which could not be described in simple words. But this is only the beginning. It was as if something foreign, frightening and cruel had penetrated the consciousness of Nathan and his loved ones. And if you do not take any action, there will be a disaster, which will no longer cope.

Lovecraft never liked humanoid aliens. He wanted to show the aliens not like us, radically different and completely unpredictable. And since his fantasy was all right, he invented a lot of monstrous monsters that easily cross the facets of space and time. And “Color from other worlds” in this regard is almost the culmination of his work. So the task of adequately transferring the work to the screens was not an easy task, but Richard Stanley did not fail and presented us with a really worthwhile thing.

Gradually, the degree of tension is heating up, the rules we are used to are no longer valid and you don’t know what the story will finally lead to, in which there is too much unpredictable and terrible. Stanley managed to build an atmosphere of a real nightmare, using elements of psychedelicism and real cruelty for this. But with all the philosophical revelations, I want to note that “Color from Other Worlds” is quite understandable, it has a clear plot structure and excellent acting parts.

I especially want to note the unsurpassed Nicolas Cage. Here he knows how to play and surprise. Even though he has had career problems in recent years, films such as Joe, Mandy, and Color from Other Worlds let us remember why we loved Cage so much and why it’s too early to write him off accounts. It is in this film that Cage plays at the maximum of his skill. It is not surprising that for the role of Nathan Gardner he was noted with a standing ovation at various festivals, including Toronto. Can still drag Cage, talent is so easy not to lose.

As a result, I will say that “Color from other worlds” will appeal to both fans of Lovecraft and lovers of smart horror, interwoven with science fiction. The film adaptation came out really atmospheric and stylish. You'll like it.