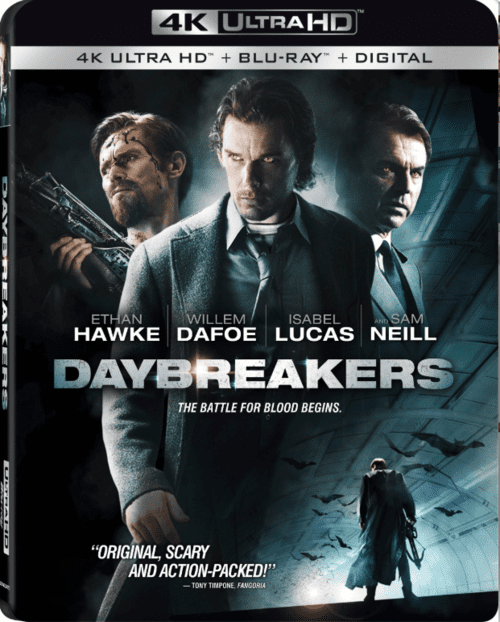 4k movies reviews
Honestly, for me, "Warriors of the World" has become a real "breath of fresh air" in the genre of "vampire" cinema. I don’t know about you, but for the first time I saw a film shot in the genre of “vampire dystopia”, when a person became a rare endangered species, and the “civilized” bloodsuckers made up the main population of the planet Earth. The second, absolutely original plot nuance of the film, for me was the possibility of the reverse process of "turning" the Vampire into a Human. Already these scenario ideas alone gave me a lot of pleasure as a spectator, moreover, the Spirig brothers turned out to be talented directors. The world of Vampires is carefully thought out and coolly visualized on the screen. Moreover, this “fantastic Universe” is a satirical cast from a real modern human society. Vampires, like humans, are divided into "elite" and "scum", and the main life value, after human blood as food, is money. And when, due to the almost universal extermination of the human race, human blood becomes an extremely expensive and scarce commodity, the head of the pharmaceutical corporation responsible for the supply of blood is more worried about falling sales and reducing profits than about a catastrophic shortage of a vital resource. So with ghouls everything is just like people’s, and they are villains, first of all, in relation to each other, rather than to the imperfect endangered species Homo Sapiens, which for them is just cattle ...

However, one does not have to lay pretentious hopes on the film to see a serious post-apocalyptic drama about the global restructuring of the familiar world. “Warriors of the Light” is a dystopia only according to the main plot idea, and in form and content it is a fantastic action thriller with chases, shooting and rivers of blood. Everything was shot spectacularly, spectacularly, although not “to the fullest”, given the small budget for such a project in the amount of $ 20 million. In any case, visually the tape looks no worse than the same "Blade" and "Another World", although there are fewer action scenes than in the above pictures.

Of the actors, in my opinion, only the "main villain" Sam Neal is truly expressive, but his character is most interesting in comparison with the rest. The character of Neal’s hero was mixed up with a “vampire” thirst for blood, a “human” thirst for profit, love for his daughter, who appeared “on the other side” of the barricades, and an almost dead, residual “humanity” in relation to other people. Sam is extremely charismatic and remembered in this film not only as a cool acting game, but also as “brutally effective” leaving for another world, I apologize for the small spoiler. As for the other two “stars” involved in the film, Ethan Hawke and Willem Dafoe are just good, but nothing more. Both actors are capable of much more in terms of dramatic mastery, but limited images do not allow them to fully demonstrate their stage talents.

On the whole, this turned out to be a clever dynamic film, which is unlikely to become a classic, but it will still be remembered for its non-trivial approach to the “vampire” theme and the implementation of copyright ideas worthy of attention.