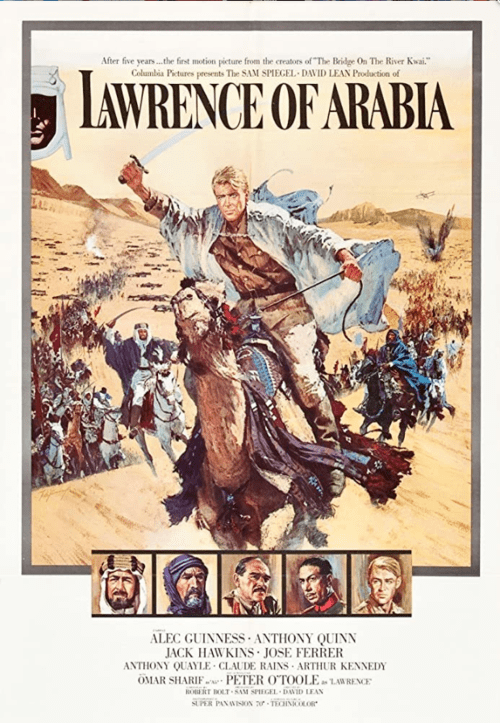 4k movies reviews
Yesterday, I thought that the best movie in the history of cinema is King Kong, but today this view has changed. Lawrence of Arabia is a true masterpiece of the British world cinema master David Lean. This is a story in which the director combines a person’s biography, incredible adventures, large-scale scenes and the color of local culture.

I can’t imagine how, after watching this film, you can not fall in love with Arabia, these endless deserts with rare oases, these sunsets, during which the horizon disappears and the sky and earth become inseparable. During the viewing, the viewer plunges into the world of the Arab people, gets acquainted with his mores and customs, realizes the spiritual essence of Arab culture and himself, unwittingly, becomes a participant in all events, accompanying Lawrence along his entire journey. During this journey ...

... we will meet new friends. Ali performed by Omar Sharif; Prince Faisal, played by Alec Guinness himself (Obi Wan Kenobi from the original Star Wars trilogy); Hoveytat leader Audu Abu Thay, played by world cinema legend Anthony Quinn. One way or another, they all accept Lawrence, who shows them that the Arab people are power, but only when they are one. In turn, it is thanks to these three characters that Lawrence gets acquainted with the local culture and joins it. One cannot but mention the heroes of the film Daoud and Farraj, who from Lawrence's servants turn into his friends, as well as Gasim (one of the Bedouins). It is the fate of these three people that will change Lawrence forever.

... we will visit incredible places. We will visit the camp of the Arabian prince, cross the waterless desert of Nefood, visit the Hoveytat, take the city of Aqaba and much more. Landscapes of incredible beauty that captures the camera operator, excite the imagination and forever cut into memory. Especially incredible shots of endless deserts and the first panoramic shots of the Hoveytat settlement. Here it is also worth mentioning the excellent work of the film's artists, who made very minimalistic, but at the same time stunningly authentic sets and costumes. Another advantage of the film is the soundtrack. The picture would not be complete without the music of Maurice Jarre, which complements the visual images created by the director and cameraman.

... we will overcome many difficulties. The film is based on T. E. Lawrence's autobiographical book, The Seven Pillars of Wisdom. You can write a lot about the numerous advantages of the film, but you should not forget about the most important thing, about what makes this film a true masterpiece ... about its semantic load. “Lawrence of Arabia” is, of course, a multi-genre movie, but if I wanted to single out one genre for myself as the main one, it would be a “philosophical” biography. We travel with our companion, T. E. Lawrence, not only in “magical” places, but also in his life ... Life, the description of which began as an ordinary adventure, but ended as a philosophical parable that there is much unchanged in this world, but this invariable remains so, while we ourselves want it. And Lawrence of Arabia tells precisely this: about one of the greatest people in history, whose measure of life was the proof that everything is possible in this world, exactly as long as there are those in it who are fighting for it.