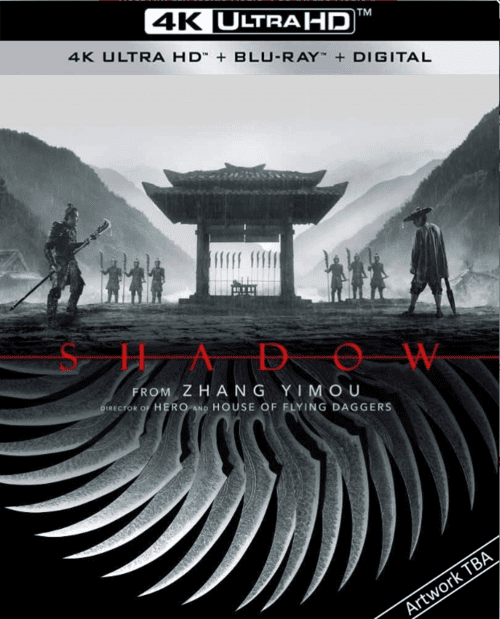 China | Hong Kong Movies / Drama 4K
Producer: Yimou Zhang
Cast:Chao Deng, Li Sun, Ryan Zheng, Qianyuan Wang, Jingchun Wang, Jun Hu, Xiaotong Guan, Lei Wu.
IMDB 7.0
File Size 56.68 GB
Film description
Taken from IMDB.COM
The film is directed by Yimou Zhang, submitted for you native 4k content. Do not miss this opportunity. The Age of Three Kingdoms. Unbeknownst to the king, Commander Zi Yu summoned General Yang to a duel, who captured and held the city of Pei. Because of the waywardness, the commander will fall into disfavor of the ruler and lose his privileges, but does not abandon his undertaking. Only the wife of the dying Yuya knows that instead of a spouse, Shadow has been operating for a whole year, a specially trained double since childhood, and Yu himself is locked up and makes insidious plans.

4k movies reviews
Shadow is a new film by Zhang Yimou. If you put all the awards that are in his account on the director’s back, I don’t think he will survive. To my shame, I saw only the Great Wall at Imou. She, in my opinion, is very good as a fighter, but does not represent anything outstanding. What does the “Shadow” offer us?

“Shadow” captures the viewer with its atmosphere for one hundred percent from the very beginning. This is facilitated by characteristic attributes. What kind?

Of the bright colors in the film there is only skin and blood (in the fighting scenes). For the rest, the viewer sees only shades of gray (and the film, I recall, color). The atmosphere is very gloomy. Universal dullness is maintained by incessant rain. Shooting a beautiful and at the same time dull look on a large scale, although we are talking only about the territories of two Chinese cities. Gray color, as it is known, consists of black and white. Yin and Yang. This is a hint in many scenes. And some battles take place on the yin-yang symbol. As a bonus, such atmospheric locations as the Palace of the Chinese Lord, dungeon, Chinese city, gorge, waterfall, bamboo forest come. In addition, each frame - at least in the frame and look, penetrate the general gloom.

Shadow is essentially a fighter. If you do not include a bore and accept the rules of the game, set by the creators (historicity and realism does not smell), then you can get great pleasure. I really liked the inventive theme with the “traditional” weapon against metal umbrellas. And what a choreography! Each fight, despite the repetition of techniques, is a real joy for the eyes. Both duels and battles of armies.

The next fat plus is characters. No insignificant or undisclosed image. Each character has its own history, the most complex (as it happens in real life) character. Merging them forms a tangled, but strong and easy to read story. Here you and intrigue, and espionage, and betrayal, and deception, and politics, and art. And to guess the real state of things almost to the very end is very, very difficult.

For the sake of fairness, I will note the drawbacks, although during viewing they are completely invisible, the picture is too tense. Lyapy and inconsistencies there (for example - why the palace - the entrance yard?). Excessive pompousness may begin to be oppressed - the eternal problem of Chinese militants. Well, the end spoils the general morality a little. I do not want to spoil, but I would have finished the film differently.

Actors. All is good. Most of all I liked Zheng Kai, who mowed under the wise version of Johnny Depp. In second place - Den Chao, who had to play several roles. In all senses. Sun Li looked good in the role of one who humbly assumes all difficulties.

“Shadow” does not pretend to be something great, but makes an enormous effort to please us viewers. It is very valuable. In our time, when there are very few nontrivial and good militants, Shadow deserves a trip to the movies.