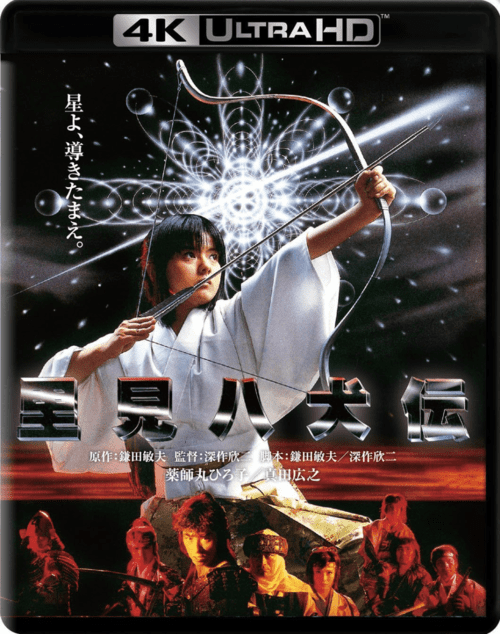 Japan Movies / Drama 4K
Producer: Kinji Fukasaku
Cast:Hiroko Yakushimaru, Hiroyuki Sanada, Shin'ichi Chiba, Etsuko Shiomi, Y?ki Meguro, Mari Natsuki, Nana Okada, Masaki Ky?moto, Kenji Ohba, Nagare Hagiwara, Tatsuo End?, Takuya Fukuhara, Seiz? Fukumoto, Akira Hamada, Shunsuke Kariya...
IMDB 6,6
File Size 58,88 GB
Film description
Taken from IMDB.COM
Where to download 4k content, movie? Our site is what you need. All 4k films of original quality, REMUX as on a blu-ray disc, for download. Today I am adding a new movie Legend of Eight Samurai 4K. The clan of the dead wants revenge on the Satomi clan. Six main ones were killed, but the seventh, Princess Shizu, escaped, and now the hunt begins. The princess is not going to give up so easily, because only she, together with the eight of the chosen samurai, can destroy the enemy's clan. If you need 4K content, movies - add us to your bookmarks.

4k movie reviews
review from imdb.com
Every once and awhile (Normally among the younger generation, such as myself) you will see a movie and think "Wow, every movie I have ever SEEN has stolen ideas from this!" You will probably be overjoyed, having finally found that one adrenaline pounding action flick that you've always searched for. Thats how I felt when I first saw "Yojimbo" anyway. "BUT!", you say, "this isn't about "Yojimbo"! You need to explain the "Legend of the Eight Samurai"!" And indeed I do, but first, the comparison has to be made. If "Yojimbo" is the movie that every martial arts director has in some way emulated, "Legend of the Eight Samurai" ("LOTES") is the movie that every Japanese made videogame has, in some way, borrowed from. Stop reading if you want to be surprised, but I will present the partial list of comparisons between this film and classic videgames.

Plot Summary: There are a group of warriors (Almost any videogame) who possess Eight Glowing Crystals (The original final fantasy, other crystal-heavy games) which must save a Princess (Mario, Zelda, Lolo, etc.) from an Evil Evil Demonically Resurrected Warlord With Weird Magic Monster Stuff (Castlevania, Final Fantasy, etc.). Along the way, an unlikely hero (almost every videogame ever) will enlist the help of a Ninja Assassin (any videogame from the 80's), the One Bad Guy Who Turns Good at the Last Minute(any Final Fantasy Game), the One Guy Who Can Somehow Use Gunpowder(any Fantasy Setting Game), the Young Boy(every game from Pokemon to Zelda). In the course of the movie, the heroes will fight a giant centipede (everything from Abraxis to Zelda), miracously cure all of their wounds with only One Night of Sleep (EVERY game). Actually defeating the final badguy requires the life sacrifice of many characters (Most games), one Ultimate Powerful Bow and Arrow that was forged by good for, well, I don't really know (Zelda), and the ending has the credits roll while a confusingly translated Japanese Pop song plays.

Now, that may have sounded funky, but you REALLY have to see this. If you aren't convinced already, here's one more incentive: it has Sonny Chiba! If you've never heard of Chiba, you should look into his work. The goriness (and hillarity!) cannot be done with more attention to detail than in a Chiba movie.

I started watching this movie because of Chiba. I kept watching because of the Big Freaking Centipede. In the end, I felt like I understood the source of every videogame and anime plot since 1975. You should see this movie even if you don't play videogames. At the least, you'll find it entertaining for the action sequences and the occasionally (And suprisingly well translated) bits of dialogue.