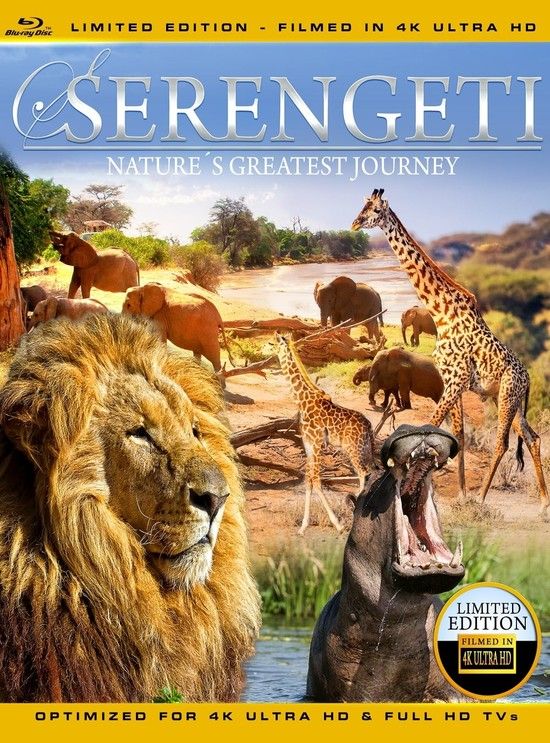 Serengeti: Nature's Greatest Journey 4K Review
Serengeti: Nature's Greatest Journey's 1080p transfer, sourced from a 4K shoot, is the unequivocal highlight of this package. Though it occasionally struggles with mildly pale blacks or general dark areas -- shadowy footage in particular -- there's no questioning the image's superiority. There's a nice, natural sense of depth even to the 2D image where the raw clarity helps to better define a lengthier field of view. Even distant animals, grasses, and trees look incredibly well detailed and distinctive. Up close, audiences will enjoy realistic, tactile grass, fur, and animal hides. Even flies buzzing around a buffalo are so clear that one can see their tiny wings against the black fur. Colors are satisfying and bold. There's a lot of earthy terrains and tan furs, but brighter, leafy greens, pink flamingo legs, and bloody red flesh are all outstanding in terms of pure color reproduction. The image suffers from discernible banding, noise, or blockiness. This is arguably the reference animal documentary on Blu-ray as far as pure picture muscle is concerned.

Serengeti: Nature's Greatest Journey contains a pair of DTS-HD Master Audio 5.1 lossless soundtracks, one of which offers narration and music and the other only music. And, really, those are the only two elements in question here. The narration is, unfortunately, not good. At reference level, it booms, blaring form the center with a grossly uneven prioritization that leaves it sounding crackly and harsh. Turn it down for better results, but then background music underneath becomes less audible and general overlay music less potent. During narration, music drops in volume so as to allow the already overcooked spoken word to take the top spot. In the music-only track, that's not an issue. It remains balanced at the same level for the duration. Basic music clarity impresses more than the narration. It's unfortunately a little over pumped, too, but not quite so badly. It's aggressive and generally well defined, with crisp, detailed instrumentals and a solid low end support. Choral chants are likewise nicely defined. There's no technical difference of note between music in the tracks, the only alteration being the constant volume level in the one without any narration.

Subtitles
None
We now have