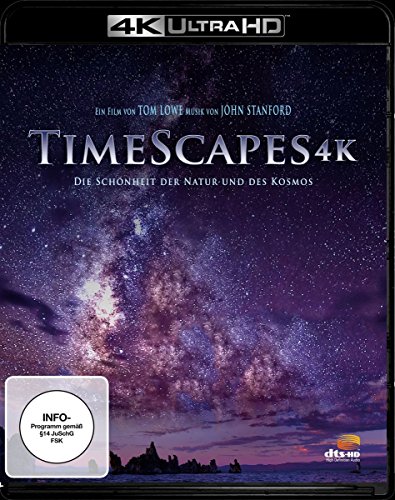 TimeScapes 4K Review
There are movies and there is cinematography. First of both are made to entertain while the second is pure art. "Timescapes" surely belongs to the latter.

Until now there were two motion pictures of such a breathtaking visual power - Baraka and Home by Yann Arthus-Bertrand. While Baraka has the most complex story and Home delivers an ecological message, Timescapes now completes this trilogy being the artistic one of that bunch.

It's right, there is no clear story behind and the scenes seem to be some kind randomly cut but this does not really matter as each of them is a masterpiece of its own. It can be compared to an exhibition of pictures, all of them show the workmanship of a great master while each is independent and not an element of a series.

Time lapse photography is an artistic expression and it is pure joy to watch it put on a screen in brilliant perfection. However do not get lost in wrong expectations, TimeScapes has not been filmed to be an entertaining blockbuster, instead it wants to show you the beauty of motion pictures - either in slow-mo or time compressed views.

So if you liked Baraka or Home you will most likely also enjoy this work. From the technical point of view there is nothing to complain about, the BluRay version is of high quality, detail sharpness is outstanding and the soundtrack fits very well to the pictures.

It is my humble opinion that motion pictures like these are important, to set a contrast to all those movies made for commerce in order to entertain the crowd. It is a fascinating expression of art and for anyone interested in cinematographic art a must see - possibly one of the best works of 2012.

With this movie watching: Journey to Space 4K 2015