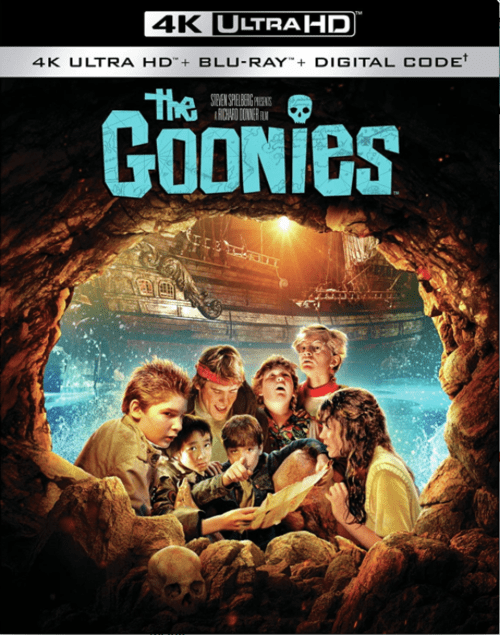 With the help of a mysterious map found in the attic, they descend into the underworld of deep caves, dangerous traps to find a pirate galleon full of gold doubloons. But the biggest danger is already on their heels: this is a gang of villains ... and a mysterious monster!

4k movies reviews
Each generation has its own films, which, while not being masterpieces, or even excellent films in the generally accepted expression of the word, remain forever in the memory, and their revision always evokes a storm of positive emotions. For those who did not watch "Goonies" as a child, somewhere in the late eighties and early nineties, this name will say little. Those who saw the film twenty years ago will probably remember it for the rest of their lives. Even if he is not much from a different league than the more famous films of that time "Indiana Jones" and "Back to the Future", the movie of Richard Donner even now captures the unsuspecting viewer and throws him into amazing adventures.

"Goonies" are imprinted in memory for a number of reasons. First, there is the spirit of adventure that permeates almost every frame of the film. This is to some extent the same "Indiana Jones", only without the fascists, with action in our time and heroes, who are about twelve or thirteen years old. Secondly, the picture offers a whole constellation of memorable characters, among whom it is easy to recognize your friends as they were in childhood. Even more surprisingly, older and younger brothers naturally help each other in difficult situations, and do not hate each other, as is customary in most youth films.

Thirdly, it is interesting to watch a movie after many years also because you can trace the career of each of the actors who played the main and secondary roles. It took some of them a long time before the whole world started talking about them (Josh Brolin, Sean Austin). Someone could not continue his film career (Jonathan Ke Kwan, Jeff Cohen). Someone was just fooling around on the set (Robert Davi, Joe Pantollano), not suspecting that a few years later their images would be jokingly called parodies of the numerous badgays played later. Steven Spielberg then forged blockbusters of all time and tried himself in producing various projects. Richard Donner made his most atypical film. And Chris Columbus wrote the scripts, and there were still five years left before the triumph with the kid left alone at home.

But there is a small detail in "Goonies" that can hardly be noticed when watching a movie at a young age - this is the subtext of parting with both childhood and your school friends. There are a number of scenes in the film where it is impossible not to notice this sadness: childhood will end, your friends will disperse in all directions; friendship for centuries will imperceptibly disappear, and only fleeting and rare meetings will remain. But, on the other hand, when you remember your childhood and the various adventures that you had to endure, it becomes much warmer in your soul, just like watching "Goonies", which takes you for two hours to the best time in the world - to childhood ...