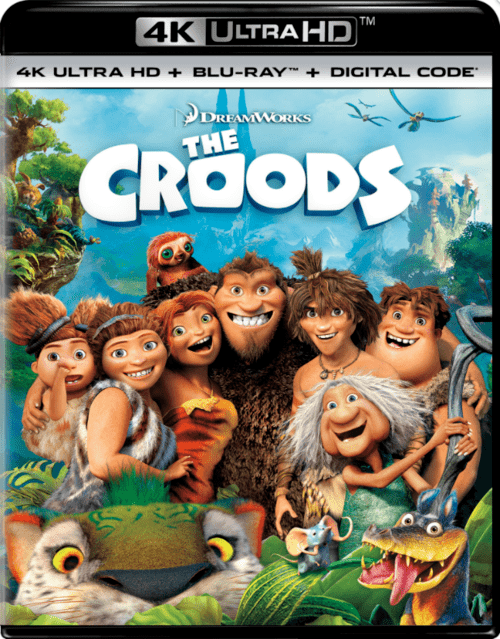 USA Movies / Animation 4K
Producer: Kirk DeMicco, Chris Sanders
Cast:Nicolas Cage, Emma Stone, Ryan Reynolds, Catherine Keener, Cloris Leachman, Clark Duke, Chris Sanders, Randy Thom.
IMDB 7.2
File Size 68.43 GB
Film description
Taken from IMDB.COM
The earthquake destroyed the home of the prehistoric family, and now the Croods will have to look for another refuge. And around a new and dangerous world! A young nomad, Malaya, comes to their aid, whose progressive views run up against the conservatism of the head of the Grug family. But only together they can survive and achieve their goal ...

4k movies reviews
The future of humanity is illuminated by the consciousness of its own imperfection. Philosophers say that man faces an alternative: either the death of all mankind, or a radical change in man. Uncertainty is frightening, and will always frighten. No technical innovations or cash injections will help to distract from reflections on this topic, so a project based on positive postulates of the future will not only be successful with a certain audience, but will be interesting at any age.

The family in question is average and ordinary. Its only difference from modern families is that they live in prehistoric times, and, therefore, they face problems that we have long ago solved now. But the difficulties within the family remain unchanged.

The director's duo of the creators of "How to Train Your Dragon" and "Monkeys in Space" were able to embody a unique project that combines the problems of any family and modern society as a whole, wrapping it all up in times of prehistoric creatures. Their style turned out to be ideal for the project, since the action in it does not stop for a second, and there are no unpleasant holes in the plot.

The script for the cartoon, based on the concept of another well-known quadrology "Ice Age", is based on the relationships of the characters, jokes and well-thought-out and staged episodes. The authors managed to endow the characters with individual characters, it is a pity that it was not possible to reveal each of them. So the dramatic episode, beloved by the scriptwriters, is minimized here, children receive the necessary morality, adults do not have time to get bored.

Perfectly drawn and written main characters - people, still lose to secondary characters - animals. But, as they say in the sentimental component, pets are usually second only to children.

The creators did not redraw the well-known creatures, but came up with a lot of new ones.

Alan Silvestri composed a memorable soundtrack for The Croods, giving the film an extra style and emotional dimension.

From a half-turn, viewers are drawn into the adventures and world of the Croods family thanks to 3D, which is optional, but extremely attractive.

The Croods, in contrast to Ice Age, has much more memorable characters, an interesting plot and incessant humor. Thanks to all this, the cartoon will be interesting to viewers of any age.