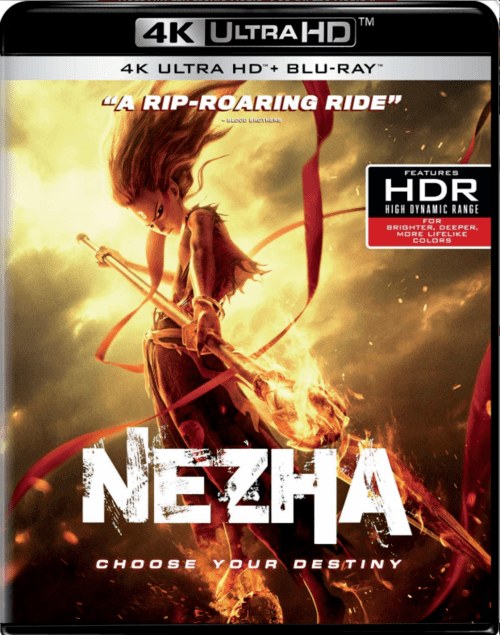 China Movies / Animation 4K
Producer: Yu Yang
Cast:Yanting Lu, Joseph, Mo Han, Hao Chen, Qi Lu, Jiaming Zhang, Wei Yang, Yuxiang He, Aleks Le, Griffin Puatu, Junpeng Ren, Xinglinr.
IMDB 7.6
File Size 56.57 GB
Film description
Taken from IMDB.COM
Ne Zha was born with an unusual appearance and abilities, which is why the locals were afraid of him and eventually drove him out of the village. The prophecy said that it was this boy who would cause the destruction of the world, and soon Neje would have to choose between good and evil in order to break the shackles of fate and become a hero.

4k movies reviews
I did not originally want to watch this film as I do not like the story it is based on but I am glad I did.

I am a huge fan of myths and legends of different countries and cultures and I liked the old Chinese animations. 4 years ago, they made a Monkey King animation which I loved and finding out that that team helped on the Nezha movie was one of the reasons why I chose to watch it.

The core concept is about fighting fate and against how others see you. Another point I loved about it is as it is a Chinese movie it is told from a Chinese perspective and from Chinese culture. This is great way for people to learn more Chinese people and culture. The down side is it is different to movies that we are used to and a lot will not be understood if we are not Chinese or know much about Chinese mythology. Also some of the jokes reference Stephen Chow's work.

The English title "I am the destiny" makes sense to Chinese viewers, it is meant to be artistic with deep meanings (I spent a day discussing the title with my wife who is Chinese, she was explaining why she understood this title while it would not have been her first choice). Think of it as "I make my own fate" or if they just chose "Nezha: Fate"

The animation is amazing, the difference between the characters (humans, animals, clouds) and the scenery is marvellous. I wished to look at more of the buildings but that's just me being weird.

The action scenes are beautifully made and flow very well. Also the pacing of the movie is perfect, at no point did I feel they dragged a joke or a scene on for too long.

The story is a retelling so some people may be annoyed that it deviating from the original but Disney does it all the time so leave them alone. The story is interesting and the changes makes it more relatable.

There are some bugs with the animation but they almost didn't finish in time for the summer holidays so I'm willing to overlook that.

This can be seen in his attention to details. One of the charecters has a different accent because of where this character is from. And the director spent a lot of time to find the perfect voice actors for his characters (which I find to be a major failing of the Chinese animation industry in general, some beautiful animations ruined by frustratingly annoying voice actors)

Background information you should know. The old guy is the most powerful in heaven. In China, a master takes disciples for training. He is like a parent, teacher and master at the same time. Choosing a master or a disciple is not entered into lightly. At that time, monster attacks are common and many people have lost family to them. Might need to find a Chinese friend to help explain other points you may find confusing

I've seen it 7 times and I advice you to watch it on IMAX, looks better.

I hope they get a good subtitles team, a lot of jokes will be hard to translate. I also hope that they don't dub it. The dubbed version of "Hero is Back" the Monkey King animation was terrible and ruined it Also hope that they will release it in China with the English subtitles so that I have an excuse to watch it again