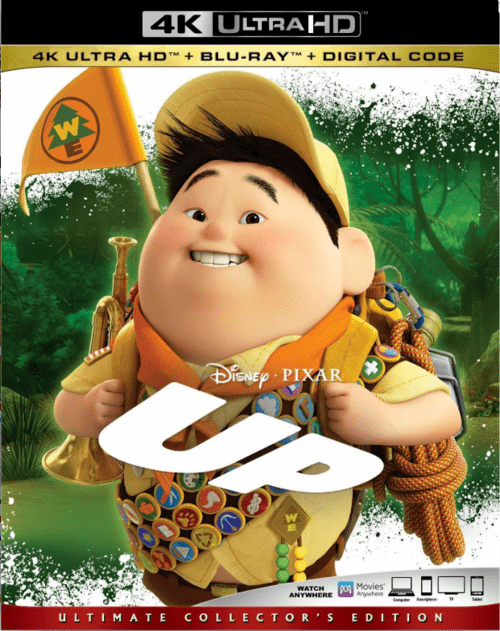 4k movies reviews
The name of the new Pixar cartoon as if reflects the aspirations of the studio for the entire time of its work: to raise the bar of quality with the release of the next animated creation. Surprisingly, pixar’s workers always succeeded in following this goal, and the scrupulousness and detail of their work was always amazing. So the phenomenal success of last year's “WALL-I” remained unchallenged until the illustrious studio set to work again. But I want to say right away that the new cartoon does not need to be compared with the previous work of the studio, because it is something of a different direction, turned inside the soul.

"Up" continues the Pixar tradition of combining the latest graphic technologies, a fascinating history and moral teaching. Confused by the same recipe, “VALL-I” surprised with the epic nature of the problems covered and gave as if phantasmagoric sketches of the future humanity, which had forgotten the true values. But the “Up” is not at all striking in its scope; this story is devoted to more mundane and everyday things, but from this it only becomes closer and more understandable to the viewer.

The plot revolves around the old grumbler Karl Fredriksen, who, instead of going to the nursing home, where he is compulsively trying to push him, decides to fulfill his childhood dream with his dead wife - a trip to Lake Paradise. By the will of fate, he has to travel in the company of his opposite - a talkative youth deprived of his father's care. Two obviously not caressed character’s lives, after going through a lot of tests, they become dear to each other, and each of them discovers something new. According to this, it would seem, a very simple and even trivial scenario develops a real human drama, covered with a touch of humor and bright colors.

A cartoon like a puff cake made by a good cook. The top layer attracts the smallest viewers: vivid characters, beautiful graphics and animation and, of course, fashionable 3D. The second layer is directly the story itself, simple, kind, sometimes naive, energetic and exciting. Well, the filling is what is hidden under these two layers: complex human destinies. Karl’s grumbling and inattention hides his life’s sufferings, despair, struggle for a dream, which in modern society is supplanted by the thirst for profit and personal gain. And Russell's talkativeness and obsession is caused only by a lack of attention and care and loneliness. But on the other hand, these two heroes retained in themselves something specifically human, which distinguishes them from the main villain, a distraught old man chasing fame. At the end of this amazing story, each character gets what they deserve, Karl finds a friend who alleviates the bitterness of losing his wife a little, and Russell receives what any child needs, attention and care.

In a word, Pixar again managed to prove that it is the most progressive studio of the existing ones, and at the same time to the end to confirm that animation can be a full-fledged work of art, and in order to create it, you just need to apply patience and zeal. The judge again raised the bar for quality and it is unlikely that this year anyone will be able to conquer it.