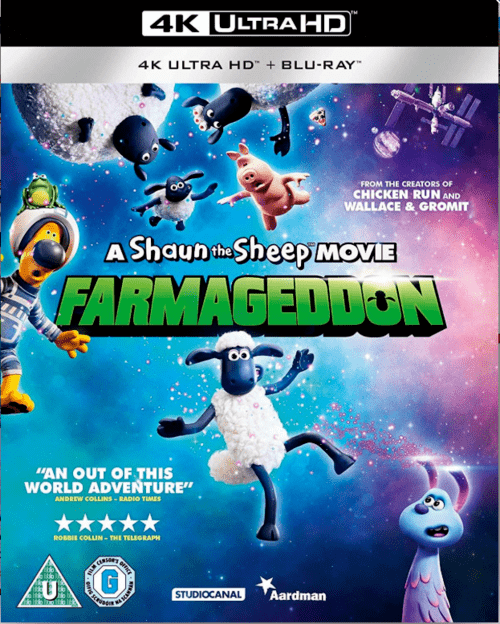 4k movies reviews
Aardman is back once again with another unique stop-motion film, this time a sequel to their 2015 animated film, however this is quite a special accession, this is the first animated feature film sequel in history to be stop-motion, most of the time, they are 3D and 2D, but we never got a stop-motion sequel which is quite rare, Wallace and Gromit doesn't really count since they are short films, this is a fully length feature film, it's been a year since we last saw them on the big screen, Aardman's last film was Early Man which was released last year in 2018, which was a really funny and great stop-motion film, as you can tell, Aardman has had a great track of unforgettable projects, like the previously mentioned Wallace & Gromit, Creature Confronts, Chicken Run, Arthur Christmas and so much more!, so I was quite excited for this new animated film from them, it's always a pleasure to watch what they have made, stop-motion is such a delight and some true to behold!, but with Off-Beat Director Will Becher and animator Richard Phelan taking over the directors chair instead of Mark Burton and Richard Starzak from the first film, so hopefully they can deliver something special, so the film was released in the UK on the 18th of October and I saw it yesterday and...... I really like it!, Aardman still hasn't disappointed me!, so let's talk about it!.

Shaun and the flock are always up to mischief on Mossy Bottom Farm, however Bitzer won't let him do anything of what he loves, which to Shaun's dismay, he's quite fed up by Bitzer's orders, however he discovers something very strange in the barn, a little cute alien named Lu-La, she is trying to get home, however there is a government agent named Red who is going after Lu-La and then capture her, so it's up to Shaun and the gang to get Lu-La back to her space ship and get her back home, while that's going on, the Farmer has started a attraction based on the ufo sightings, he has started a little fair called "Farmageddon", hopefully for him to get lots of money to buy this new combine harvester, like the first film, the plot is fairly straight forward and very simple, but that's kind of the charm of Shaun the Sheep, the simplicity is part of what makes the TV-show, the first and this sequel work, it has a lot to work with and it has something for everyone, it's clever, laugh-out-loud comedy delivers some great visual gags and subtle references to Sci-fi films, it isn't for the sake of a joke, they do it to make use of their animation and tell their story also, as you can tell, it has no lines or dialogue, so in other words, there is no talking, which is good, because it can tell it's story with visuals and make it easier for everyone to understand what's going on and that's he beauty of it, weither it's straight forward or not, visually story telling is a unique way of carrying out a third act structure film and this film did it in a brilliant, it still has that British charm and sense of atmosphere to it also, making it feel incredibly British and funny at the same time!, it has the right amount of heart and it is incredibly sweet, so at least it shows that Aardman does care about what they make, okay sure, it's simple, it's predicable and it's nothing new, but it's in the execution that makes it all worth it, the well timed comedy, the clever slapstick and visual gags, the heartfelt and sweet moments and two great end credit scenes (seriously, watch until the end, there is a mid credits scene and a end credits scene also, really funny!), it really makes this film offer so much more then it already has, for parents, of children and teenagers, it shows that Aardman can still well told stories and bring entertainment that everyone can enjoy!.

The animation just gets better and better, obviously it's stop-motion and it looks amazing!, everytime bit of detail is present in this film, the character designs look simple yet quirky, their movements are cartoony but impressive, the backgrounds, props, buildings are all well done!, when it comes to the alien technology, the spaceship and how manufactures, it's all very interesting and creative, the gags and slapstick are well time, funny and of course impressive, Aardman always find a way to make stop-motion as brilliant as it could get, the atmosphere, the charm and simplicity, it all fits perfectly, I love the design of Lu-La, she has a mix of a dog and Llama's neck, she is very colourful looking also, her ability to control telekinesis and so much more is well done with some good effects!, each character has a unique design and they all stand out, they don't blend in and look the same, they have great and simple designs, the animals look very cartoony and the humans are a mix of down to earth and cartoon animation, many of the props look awesome, like the spaceship and the small town near Mossy Bottom Farm, which also looks great as always!, overall?, Aardman still proves that stop-motion animation is still a relevant piece of animation media, it's still got effort, colour, style, care along with great looking characters, it's companies like Aardman who show that effort means everything and it certainly shows in this film!.

The characters are just as charming and fun as they were, with some fun and interesting new characters, Shaun is still the cheeky, mischievous, heroic and charming leader that we all know and love, who would do anything to help his friends in any way he can, even if he does make a few mistakes, Bitzer is still the best friend of Shaun who maybe strict with his rulebreaking, but is still loyal to the farmer and does look out for Shaun and the flock, the Farmer is still the "so full of himself and bossy" character who is quite funny with his side plot and is always entertaining to watch, the flock are mainly the comic reliefs who always have a time to shine, they all have funny moments especially Timmy, basically the characters from the first film and the TV series are still just their charming selves, with Shaun and Bitzer getting the most screen time, the new characters as little as their is are really entertaining!, the obvious one being my favourite is Lu-La, the alien Shaun encounters, she is awesome!, funny, creative, interesting, cute and enjoyable!, I really liked her a lot and she is my favourite character in the film!, Agent Red is a interesting villain, although not as great as Trumper from the first film, but pretty understandable in this case with her backstory which I won't give away, as for everyone else like the Hazmats, the towns people and the UFO nerds..., well they don't do anything really, however they do serve their roles quite well, they are comic reliefs also, they deliver some really funny, clever, comedy along with slapstick and gags, the voice acting is brilliant, even though there is no talking, they do the best they can with the characters, Justin Fletcher, who you may know as Mr. Tumble if you are from the UK, he is the voice of Shaun, he does his baaaas brilliantly, but is generally just quite charming, everyone else does a amazing job like John Sparkes as Bitzer and the Farmer, blogger Joe Sugg as the Pizza Boy (Yes..., I'm not kidding, glad to see that he is doing more voice work in animated films!), as for everyone else, they do a really good job of the character they voice and they fit them perfectly, who needs characters that are deep and complex?, when now and then you just need charming, fun, hilarious and memorable characters along with great voice work, nothing more and nothing less.

The song "LAZY" by Kylie Minogue and the Vaccines is a pretty great song, with great lyrics and a nice beat, along with a great score by Tom Howe.

For the first ever stop-motion animated sequel, this is probably one of the rarest animated sequels to be as faithful to the first film and source material out there, which also results in a really great family film, A Shaun the Sheep Movie: Farmageddon is the worthy sequel to a fantastic animated film, with it's simple story, hilarious humour, well crafted stop-motion animation, charming characters along with great voice work and excellent music, do I need to say why go and see this?, because you need to, it's a high recommendation for Aardman fans, animation fans and for the whole family, pretty much everyone of all ages, I'm glad Aardman is still making films, they know how to make their films fun and impressive, now hopefully their next film will be a sequel that many people would want, I mean this year has been pretty great with animated sequels, so hopefully when Chicken Run 2 comes out, that'll be worth the wait, but so far we don't know what's going there, but we'll have to wait and see, now... I got to see a certainly kooky family to see next week with a certain name that starts with a "A"..