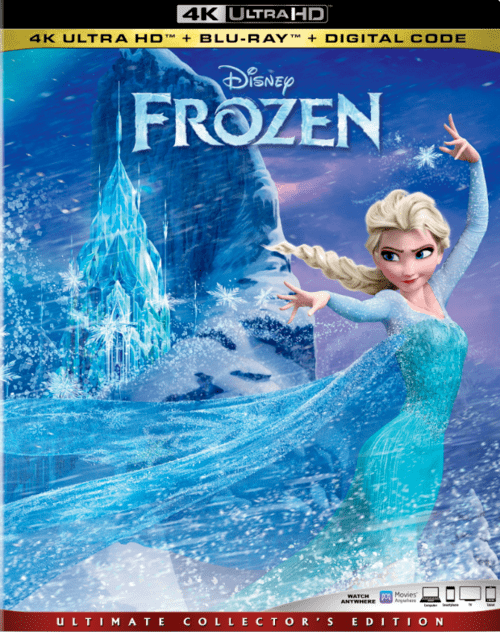 4k movies reviews
Disney has surprised us more than once or twice with its projects. Now that he has already released four of his three-dimensional animated films (regardless of Pixar), we can say that 3D has been mastered by the former animation kings with a bang. And the success of “Volta”, “Rapunzel” and “Ralph” was perfectly continued by the film based on the famous fairy tale Andersen's “The Snow Queen” “Frozen”, known at our box office as “Frozen”.

In a nutshell about the plot: two princesses live in the northern kingdom of Arendelle, one of them, the eldest Elsa, is a witch with ice magic. This at first is very pleasing to her younger sister Anna, they enjoy playing with the help of her sister's magic, but once an unpleasant excess occurs - Elsa accidentally hooks her sister with magic. After that, she was forbidden to communicate with barely cured Anna, and it turned out that the future queen could not control her magic ...

And so, when the time comes for Elsa to become queen, she meets her sister, and what happens is that she was so afraid all the time that she was locked up - in the heat of a quarrel with her sister and anger at her (as it turned out, not in vain) she loses control over the forces and sends eternal winter to the kingdom. Anna, feeling guilty, sets off after her ...

And so begins a beautiful dramatic tale.

This cartoon is closer to Disney's old creations, his classics, which is not surprising - after all, the grandfather Walt himself carried the idea of the adaptation of The Snow Queen. Here, much more emphasis has been placed on the drama and history of the characters than on humor, and quite a lot of songs - much more than in Rapunzel, and indeed a lot even by the standards of the classics, as well as quite a lot of signature Disney stamps like “the handsome prince” "And other things. Does this make the story worse? In no case!

Andersen's tale completely reworked, leaving only common features. So, Gerda embodied in the image of Anna, while Elsa is a symbiosis of the personalities of Kai and the Snow Queen, and, more likely, the first. Well, some allusions to the original appear during the development of the plot. As a result, it turned out to be a completely separate, kind, bright and warm story.

The characters are worked out perfectly - starting from the Snow Queen Elsa and the merchant Christoph, ending with the leader of the trolls and snowman Olaf. They are so lively, charming and interesting that even to single out one of them is especially very difficult.

The basis of the story is the complex relationship of two sisters - the lively, cheerful Anna and the cold, distant (albeit forced) Elsa. True sisterly love, when each of them is ready for anything for the sake of a loved one, eventually overcomes all fears and prejudices, and it really touches. The final scene is generally very emotionally strong.

As for the antagonists, since the main emphasis was placed on the history of the relationship of the main characters, the villains faded into the background. But if the old Duke of Varrava is a typical comedic “bad guy,” then Hans is a special case. He is a total rethinking of the whole canvas of the "Disney fairy tale" - and all because, being a villain, he completely destroyed the ancient fairy-tale and Disney stamp of the "handsome prince". On the other hand, he personally did not seem to me such a disgusting hero - he has quite a serious motivation, and to a certain extent he is capable of sympathy. But his pettiness and ambition make him go on betrayal and deceit.

For the humor, which is rather straightforward in this film (although this is rather a plus here), they are responsible, in addition to the duke, also to the ice trader Christoph with his deer Olaf (the latter, although he is not inferior in terms of charisma to the horse from Rapunzel), and Snowman Olaf. They fit perfectly into the story, complementing it, and in themselves are very interesting.

Well, the songs. There are a lot of music and songs here, they are very beautiful and melodic. Songs, of course, are best heard in the original, but their localization into Russian is very decent. I think that the soundtrack of "Frozen" is quite capable of competing for various nominations in their fields.

And, of course, the main idea itself is heard very brightly. Having looked through “Frozen”, you will surely remember your near and dear ones, and once again make sure that family and consanguinity are something to be proud of and worth to be protected. After all, you have no one closer to them, and never will be, and only their love is the strongest. And, under the influence of this love, even the coldest ice will become warm.