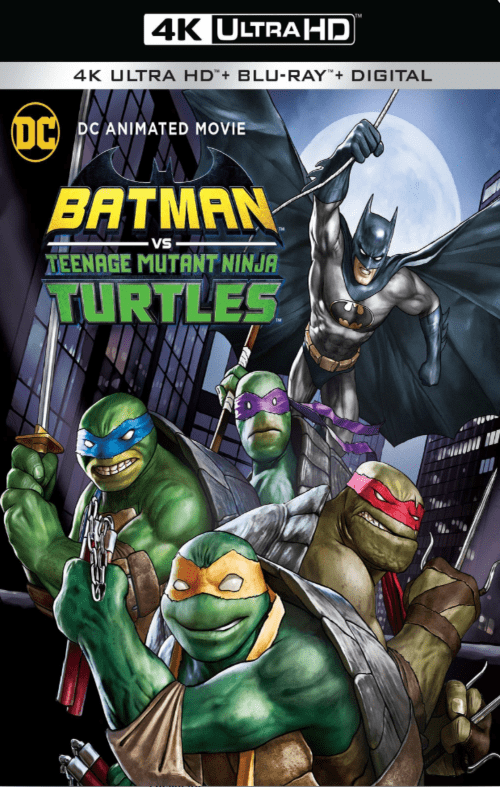 4k movies reviews
From time to time, it becomes clear that film comics lack something new. Batman, one of the most popular superheroes, despite his wealth in the past, has been stuck in doom and gloom in recent decades (the only exception is Lego Batman). A new look is always interesting, especially a cheerful and fascinating look. In order to dilute the world of the Dark Knight, ninja turtles came to visit him. DC-Warner and Nickelodeon, suddenly, correctly beat such a wild disparate experience of modern pop culture. The scriptwriters correctly understood the purpose of the Turtles team in Gotham and created a work that is both active and humorous, but not overly stupid.

Schredder arrives in Gotham with his gang of ninjas to remove equipment from Bruce Wayne for his vile purposes. Turtles are chasing him. Initially, fearing their presence and ... appearance, Batman engages with them in battle, but later unites to fight Shredder, Ra's al-Ghul and other host of "Batman" enemies: Mr. Freeze, Bane, Scarecrow, Two-Face, Penguin, Poisonous Ivy, Harley Quinn and, of course, the Joker.

The scriptwriters very freely treated the original source, however, this even went to the benefit of the material. In general, the work is presented in the form of free fantasy and the plot does not take much time to create a setting for the crossover, plunging into the thick of events from the very first scenes. The effect manifests itself almost immediately and will probably find a response in the hearts of both fans and viewers barely familiar with franchises: most viewers of such animation projects would immediately prefer to go to a central conflict. It is implemented just in powerful form: Batman is fighting Shredder, Turtles are trying to repulse supervillains and, oddly enough, civilians die in tons. An easy adventure full of cruel scenes without excesses, which adds zest and special touches. Indeed, well, do not abuse the gags about the notorious gang of turtles, although they are abundant here, but Batman still remains Batman.

It’s clear that the animated film titled “Batman vs. Teenage Mutant Ninja Turtles” must be filled with a fan service. Each scene contains an “easter egg”: from black and white credits, reminiscent of the style of the original comics about the Turtles, to the classic Bet Cave. A separate bow to the final credits: for dedicated people, watching them will bring a lot of pleasure. It is also impossible not to be an enthusiastic character design: the creators deftly were able to combine both the definitely cartoon-like style of Turtles and the grim Gothic world of DC, where a funny quartet of reptile ninja does not stand out.

However, in its concept of Batman vs. Ninja Turtles, there is one problem - a slightly unbalanced tone. Gotham's dark gloom gives way to a fun theme park. And the Turtles themselves are not very distinguished: they seem to be deprived of their individuality, and their characters have been spread over all four heroes, for which, in fact, they criticized the new series from Nickelodeon. When it comes to villains, it’s also a little sad: the same Scarecrow is indistinguishable by motivation from Two-Face; in the animated comic, they are just stupid thugs on the way of the heroes to the "main boss".

For the conservative viewers, “Batman vs. Teenage Mutant Ninja Turtles” may turn out to be too radical a spectacle, although this flight of free fantasy shows two things: firstly, how talented WB / DC screenwriters are, and secondly, about the universality of the idea of fighting evil. The project came out exclusively "for their own": if someone loves Teenage Mutant Ninja Turtles and / or the Bet-family, then this is likely to become a very noticeable work. Spectators random, alas, may not appreciate the project: nevertheless, an overt orientation towards subtle fans of the genre, triumphantly striding to the masses, is noticeable.