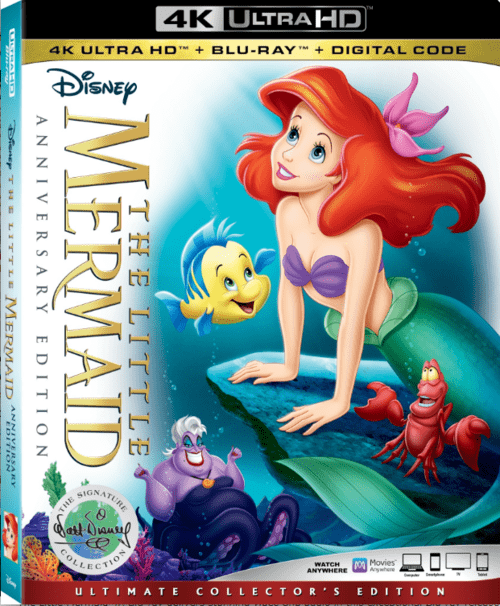 USA Movies / Animation 4K
Producer: Ron Clements, John Musker
Cast:Rene Auberjonois, Christopher Daniel Barnes, Jodi Benson, Pat Carroll, Paddi Edwards, Buddy Hackett, Jason Marin, Kenneth Mars, Edie McClurg, Will Ryan, Ben Wright, Samuel E. Wright, Hamilton Camp, Debbie Shapiro Gravitte, Robert Weil.
IMDB 7.6
File Size 54.24 GB
Film description
Taken from IMDB.COM
Popular cartoon about the mermaid that you can buy in 4k digital quality. The mysterious depths of the sea keep many secrets, and the inhabitants of the ocean can tell many amazing stories. And the story of the little mermaid Ariel was and remains the most incredible of them. The daughter of the powerful king of the underwater world Triton, she once falls in love with a beautiful and courageous prince. But can they be together - an earthly man and a sea maiden? However, these feelings overcome any obstacles. For her love, Ariel is ready to do anything. Even if in order to gain her happiness, she will have to leave her native ocean forever and forever become an earthly girl ...

4k movies reviews
The Little Mermaid is a cartoon with a special atmosphere. He differs from the other unusually sincere "teen" romance. The first love, the controlling father, loyal friends, the sea and the ships, dreams and overcoming obstacles to their realization - all this is in the cartoon. Plus, it is beautifully drawn. It’s hard to imagine how artists hand-painted so many air bubbles! There are millions of them! But thanks to such a detailed study, the underwater world looks believable. "Little Mermaid" - a very colorful picture.

Beautiful and unusual in the cartoon not only sea and terrestrial landscapes, but, of course, heroes of history. Little Mermaid Ariel is a very young girl with a bright personality. Her character is a combination of youthful maximalism, childish openness in the expression of emotion and “irresponsible” curiosity with determination, independence and strength of mind. And her big eyes and fiery red hair make her look different from other “Disney” princesses.

Prince Eric, beautiful, kind, responsible and courageous, perhaps, one of the best fairy princes. He is somehow especially calm and reliable. And the most "non-standard" hero is Triton. It is difficult to remember at least one cartoon with the same father of the main character. After all, he behaves like a real dictator: strong, hard and uncompromising. But Triton loves Ariel more than other daughters, and the character of the young mermaid is more independent than that of the sisters, which is why he worries about her more. Give your daughter the freedom to choose or continue to control her every step? By the end of the film, Triton will resolve this dilemma for himself, and he realizes his mistakes, after all, is not so callous.

In this cartoon, even every minor character has memorable moments. Everyone remembers the “crazy” chef, the witch Ursula and her two moray eels, the positive dog Max, a friend of Ariel Flaunder. And the most amusing hero - is the sea gull Scuttle. His "romantic song" makes the audience smile, and indeed, in each episode, he is very funny. And, of course, you can not forget about Sebastian. Musical scenes with his participation add to the picture and positive, and romance.

About first-class music in the "Little Mermaid" should be said separately. No wonder the cartoon composer Alan Menken received the Oscar for his work on the cartoon. Each song (in the original version) is a real hit, which creates a special mood. Incendiary and rhythmic song "Under the sea" is impossible not to sing along. Smooth and melodious "Kiss the girl" in the funny performance of Sebastian from the very first notes tunes in on romance. Well, "Part of your world" perfectly conveys the experiences of the main character.

The Little Mermaid is a cartoon at the same time funny and touching, naive and serious. He does not grow old even today, attracting with his sincerity and musicality. And it is correct that the creators of the picture departed from the original G. H. Andersen and completed all the "happy ending". Andersen's Little Mermaid - a symbol of sacrificial love. Her tragic story is more likely for adults. Children believe that good and love always win. And the beautiful “Disney” cartoon about how the Little Mermaid realized her dreams is another kind fairy tale that helps the audience of any age to believe in a miracle.