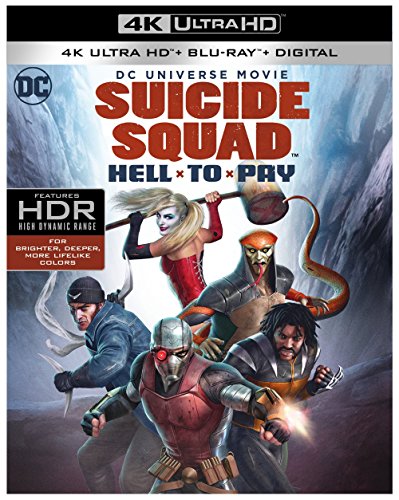 Life is both very precious and also very, very cheap in this R-rated adventure that sees Task Force X sent by Amanda Waller on a secret mission to obtain a supernatural McGuffin, whose nature is too spoilerish to reveal but suffice to say it offers something every character wants. And for this cross-section of DC supervillainy, that's plenty reason to be even more cutthroat than usual.

As this is an off-the-books mission for the Squad, they are stripped of their usual resources and gear and are reduced to driving across country in an RV in what amounts to a road trip comedy about a dysfunctional family (of sorts). Think of it as Little Miss Hellfire.

If this is a dysfunctional family then think of Deadshot and Bronze Tiger as the bickering parents who have different ways of handling their difficult brood, which includes Harley Quinn, Captain Boomerang, Killer Frost, and Copperhead. Deadshot is the grizzled, Eastwood-esque pragmatist, while Bronze Tiger, although a man with a violent past, is ultimately a good guy who believes in a higher order and divine justice.

The rest of the characters, good (ok, mostly bad) and bad (all bad), all hold varying degrees of belief depending on their individual circumstances. It's this exploration of faith and redemption that sets Suicide Squad: Hell to Pay apart from other DC animated fare and makes for a more intellectually engaging comic book flick than most.

Hell to Pay is also distinguished by its dark, droll wit, which is evident not only in Alan Burnett's script (which he claims is his last one before retirement) but also by Sam Liu's direction. Whether it's the glib, cutting one-liners or the cheekily placed sight gags (sometimes involving Gideon Emery 's Copperhead), Suicide Squad: Hell to Pay proves to be one of the more grimly amusing DC animated films. That humor helps make the film's larger dramatic points more palpable.

The voice cast help deliver these much-needed laughs to lighten what is ultimately a rather heavy story about sin and salvation. Christian Slater makes for an appropriately sardonic Deadshot, while Billy Brown imbues Bronze Tiger with a gravitas and dignity befitting a character far too honorable to be among a team this bad. Liam McIntyre's Boomerang and Tara Strong's Harley get the lion's share of notable one-liners, although Hell to Pay still does little to convince one why the baseball bat-wielding, incessantly mercurial Harley is needed on a team tasked with obtaining a supernatural item - besides the film needing comic relief.

Hands down, Greg Grunberg gets the movie's biggest scene-stealing role as Maxum Steel, a d-bag with ties to the mainstream DC Comics that will hilariously surprise you. He provides a key to the puzzle that Task Force X needs to solve. The movie's handling of all that proves to be one of its highlights. Kristin Bauer van Straten is also notable in a less comedic role as the always chilly Killer Frost.

Less effective are Vanessa Williams, who never quite manages to make Amanda Waller command your attention the way a character nicknamed "The Wall" should, and Jim Pirri as Vandal Savage, a raspy, vaguely foreign-sounding heavy who isn't terribly interesting or dynamic.

Suicide Squad: Hell to Pay is populated with a slew of familiar DC characters in roles of varying degrees of significance: Steel Savage, Knockout, Professor Pyg, Zoom, Silver Banshee, Blockbuster, Tobias Whale, Count Vertigo, Punch & Judy, and even Two-Face all pop up. The movie could almost work as a stand-alone film if needed as it has no problem killing off characters you'd suspect might be too notable to dispatch. But then a movie called "Suicide Squad" wouldn't have much impact if no one died.

These deaths certainly lend weight to the overall story as the prospect of a permanent demise - and what, if anything, may await them on the other side - looms large over the entire story. The saying goes that everyone wants to go to heaven but no one wants to die and that holds true even for comic book characters.