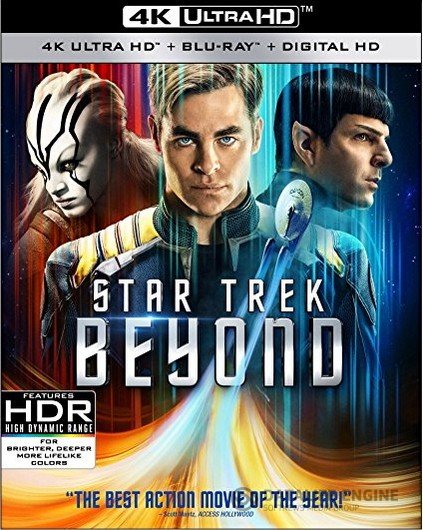 4k movies reviews
The previous film in the franchise, Star Trek: Retribution, ended with the Enterprise embarking on a five-year mission to explore the outer reaches of space. By the beginning of the new story, the journey has been going on for three years. During this time, the crew managed to become a family, and the ship became a home. But the quiet life of our heroes is violated by an unexpected command order. The Enterprise must find a ship lost in an impenetrable nebula and deliver its crew to the new base of the Starfleet, Yorktown. By subscribing to this assignment, Captain Kirk had no idea what the usual rescue operation would turn out to be.

I love that Star Trek, relaunched in 2009, is moving forward. Each next film brings something new to this story. The first tape was dedicated to the debut mission of the brand new Enterprise and team building. The second brought in more darkness and showed how the ship and the crew gradually become one. The events of the first films, for the most part, took place on board a starship, it is time to find out what will happen to the characters if you snatch them from their familiar habitat.

Changing locations and dividing the crew into small groups gave the plot a novelty. It was interesting to watch the communication between Bones and Spock, Kirk and Chekhov, Scotty and Jayla. Their attempts to find each other and return home while realizing how much they mean to each other is the best part of the film. I would like to note the gorgeous work of the make-up artists and the beautiful soundtrack, especially the melody that accompanies the first appearance on the screen of the Yorktown base.

The Star Trek film series often featured interesting antagonists, but not this time. The main bastard became the biggest disadvantage of the picture. Kroll is a bloodthirsty maniac hungry for war. The backstory told closer to the finale makes it a little less banal and a little deeper. However, a couple of minutes' excursion into the past does not negate the fact that for an hour and a half the viewer was shown a stereotyped villain in the spirit of the old "James Bond".

Shortly before the film's release, Leonard Nimoy died. This actor has been the heart and soul of Star Trek for many years. I am grateful to the creators of the picture for how beautifully and delicately they said goodbye to the wonderful artist.

The film has flaws, the most obvious of which are: an undisclosed villain and an almost complete lack of new characters. However, the interesting plot, good acting and great visuals make me close my eyes to the disadvantages and just enjoy watching it.