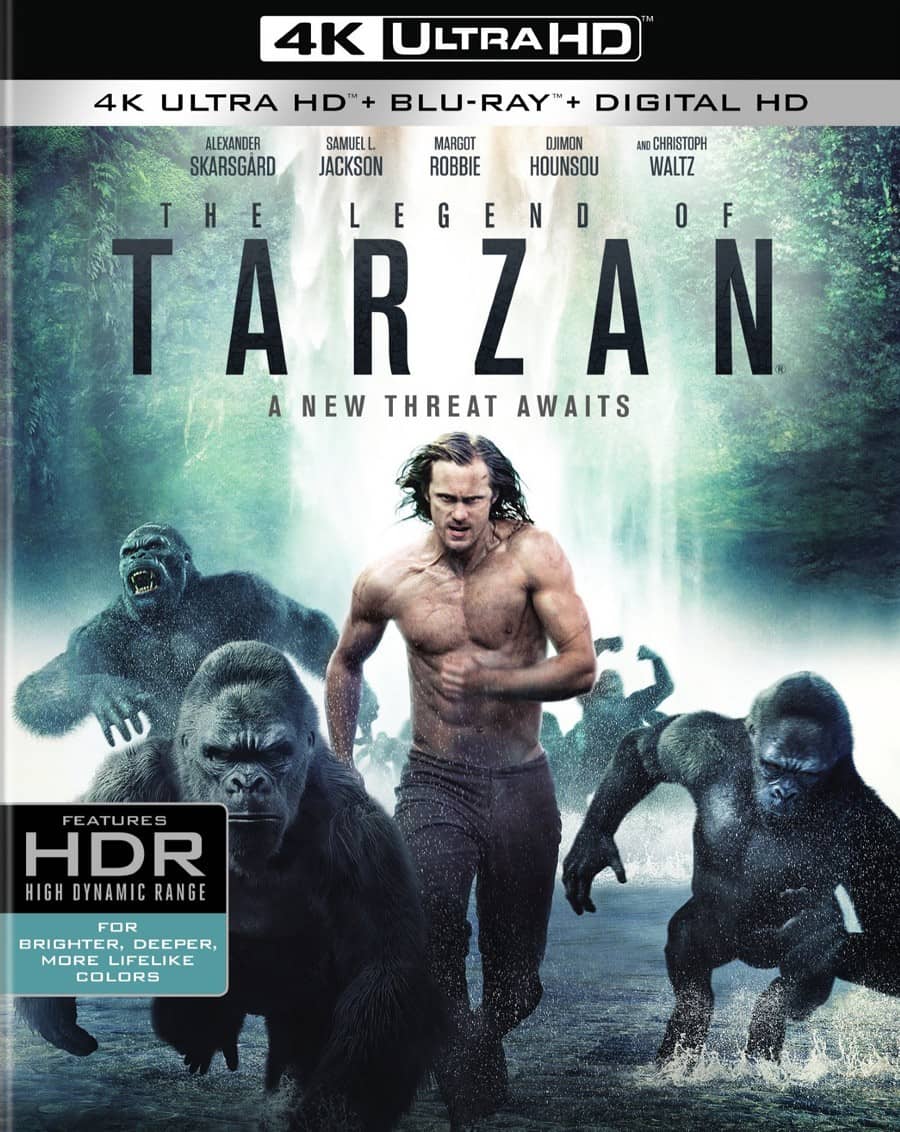 UK | Canada | USA Movies / Adventure 4K
Producer: David Yates
Cast:Alexander Skarsgrd, Rory J. Saper, Christian Stevens, Christoph Waltz, Samuel L. Jackson, Margot Robbie, Sidney Ralitsoele, Osy Ikhile, Mens-Sana Tamakloe, Antony Acheampong, Edward Apeagyei, Ashley Byam, Casper Crump, Adam Ganne, Aleksandar Mikic...
IMDB 6.3
File Size 51.43 GB
Film description
Taken from IMDB.COM
Following his parents' death in Africa, John Clayton has been be raised by an ape, was known by the name Tarzan, but eventually left Africa and for his parents' home in England, along with the woman he fell in love with and married, Jane Porter. He is asked by Belgian King Leopold to go to Africa to see what he has done there to help the country. Initially, he refuses. But an American, George Washington Williams, wants him to accept so he can accompany him. He says that Leopold might be committing all sorts of atrocities to achieve his goal, like slavery. Clayton agrees and his wife insists that she accompany him because she misses Africa. When they arrive, a man named Rom, who works for Leopold, attacks their village and captures Tarzan and Jane. With Washington's help he escapes and sets out to rescue Jane by going across the jungle. Washington joins him despite being told that he might not make it.

The Legend of Tarzan 4K Review
There's a moment in David Yates' excellent and emotionally resonant Legend of Tarzan when George Washington Williams', played by Samuel L. Jackson, goads civilized Tarzan, played by Alexander Skarsgard, just a little too much. Alexander Skarsgard's Tarzan erupts instantly and spectacularly with a combination of physical force and gut-chilling animal sounds and pins the American to a wall, then growls out the words: "They have my wife, and their families." In this single small moment, Yates and Skarsgard put on display Tarzan's utter commitment to the woman he loves while at the same time same evoking the internal contradiction of a man who in adulthood could pass among society as a aristocratic Englishman, but whose feral upbringing has left him with a volatile beast within that can overwhelm the civilized trappings in an instant. Unlike the filmmakers who have come before him, Yates effectively captures this duality – and in so doing delivers a film that is fresh and appealing to modern sensibilities, yet is faithful to the character of the books in ways that Hollywood has never attempted before. The result is pure pulp poetry with a beating heart. Edgar Rice Burroughs would approve of it, and 21st century audiences will, if they can be lured into theaters to see it, be intrigued and satisfied by it.

Legend of Tarzan begins eight years after Tarzan and Jane (a luminous and effective Margot Robbie) have left Africa to undertake a gentrified life in London, where Tarzan has claimed his birthright of John Clayton III, Lord Greystoke. He is drawn back to Africa at the behest of George Washington Williams (Samuel L. Jackson), a black American journalist who is based on the historical figure who led the exposure of the crimes of King Leopold II of Belgium. Williams recruits him to assist in Williams' quest to investigate the suspected crimes of King Leopold. Accompanied by Jane, the two men return to Africa where Leon Rom (Christoph Waltz) has laid a trap for Tarzan that, if successful, will result in Rom delivering Tarzan to Chief Mbonga (Djimon Hounsou), who seeks to deliver vengeance to Tarzan for killing Mbonga's son many years earlier. Mayhem and adventure ensues.

When Edgar Rice Burroughs was firing on all cylinders, his pulpy, emotionally infused adventure novels were able to strike a mythic vein that caused him to become the J.K. Rowlings of his day – the first global superstar pop culture author, translated into 57 languages, his books and characters embedded in cultures from Russia to Turkey and Japan. At the time of his death in 1950 he was the best known author on the planet with his works selling more than the combined sales of his contemporaries Hemingway, Faulkner, and Joyce. Hollywood tried more than fifty times and although the movies obviously met with success — not one of them ever captured what the grand old pulp master had created on the page. Yates is the first to do it; his Legend of Tarzan stands head and shoulders above the Tarzan movies that came before it–and regardless of how it fares in the crowded summer theatrical marketplace, it is assured of a place in cinema history as the Tarzan movie that captured the heart and spirit of Burroughs' creation.

It remains to be seen how 2016 audiences react. Has Tarzan's time on the world stage passed, or is there indeed something mythic and archetypal that can cause the character to come alive in the modern imaginations? Yates and his team have given it an extraordinary "best shot" and have created something of heart, beauty, and lasting value. The editing of the film by Mark Day is taut and streamlined –not a moment is wasted and the story drives forward with energy and commitment; Henry Braham's cinematography is cool and brooding in London, and lush and earthy in Africa; the production design by Stuart Craig is grand and evocative; and the music by Rupert Gregson Williams is both emotional and pulse-quickening. Special mention goes to screenwriters Adam Cozad and Craig Brewer who updated the Burroughs material, giving it unexpected historical gravitas, while excavating from the pages of the early Tarzan books the core values that made them unique. And the CGI wizardry is seamless, photo-realistic, and effective on all levels.