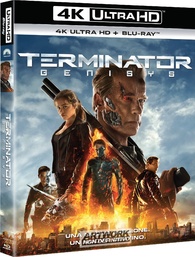 Storyline
When John Connor (Jason Clarke), leader of the human resistance, sends Sgt. Kyle Reese (Jai Courtney) back to 1984 to protect Sarah Connor (Emilia Clarke) and safeguard the future, an unexpected turn of events creates a fractured time-line. Now, Sgt. Reese finds himself in a new and unfamiliar version of the past, where he is faced with unlikely allies, including the Guardian (Arnold Schwarzenegger), dangerous new enemies, and an unexpected new mission: To reset the future...

User Reviews
I may be one of the flock, but I am a big fan of the Terminator franchise. This movie was appropriately delivered to fans of the franchise more than the prior 2 sequels. Arnold was Arnold and genuinely looked like he was having fun with the role. The story to me was pretty well written and despite lots of turns along the way, was engaging. There was plenty of comic relief. The battle scenes play homage to the aesthetic and look of the future wars in the 1st two movies.

Emilia Clarke did a pretty good job of playing Sarah Connor although she might have been a little softer looking than Linda Hamilton, I think the justification of the plot makes you understand a little more of how and why she is the way she is.

I'll tell you what they didn't do in this film. They didn't go and screw up the source material like the Star Trek reboots have. This story plays out a different scenario but the characters both old and new are familiar and this movie was done very well with respect to the source materials. If you are a fan of the franchise, you'll feel like you are getting more of what you might have had to imagine way back in the 1984 film. You'll enjoy it.

Any fan of T1 and T2 should go and see this and add it to your library.