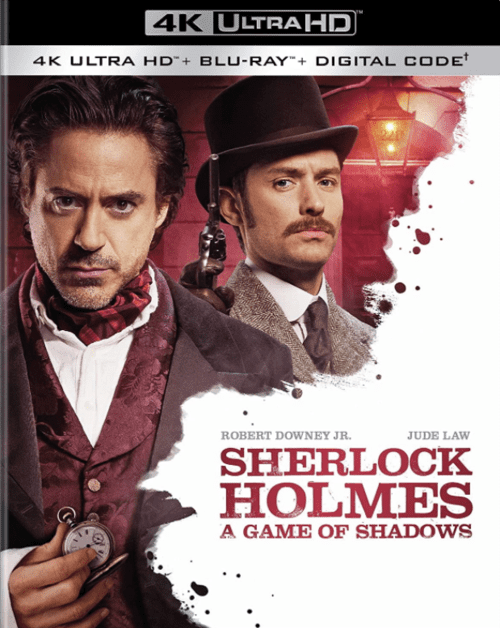 4k movies reviews
Back in business.
Two years have passed since Guy Ritchie presented the world with his interpretation of the famous detective's adventures. The film, which, at one time, made a lot of noise, but for the most part we liked it, as evidenced by both decent box office receipts and rave reviews from the audience. And now, two years later, the time has come for the long-awaited continuation.

Shadow Play is, in fact, reminiscent of the second episode of the film, rather than a stand-alone sequel. If you liked the first part, then the second film will most likely not disappoint you. Of course, this effect is achieved by the fact that the composition of the team of creators has not undergone significant changes, so the atmosphere and style of the picture remained in place. Philippe Ruslo is back in the operator's chair, and, of course, the brilliant Hans Zimmer is in charge of the musical component. But at the same time, there is a tangible development. Guy Ritchie clearly understands the secret of his success, and in this case these elements have been reinforced; undoubtedly, the action became noticeably larger, and since the timing of the picture did not change, this affected the acceleration of the plot dynamics. The presence of more action scenes implies a decrease in the gaps between them, which can introduce some confusion into the plot. But in fact, most of the characters are already familiar to the viewer from the first film, which makes it possible to devote more screen time to exciting spectacular action, not to the detriment of the logic of the narrative.

Of course, it is also pleasing that there is more corporate humor in the film. The eccentric Holmes performed by Robert Downey Jr. is annealing to the fullest, continuing to amaze with his inventions. The Gladstone Bulldog will be hit again early in the movie. Watson (Jude Law) will finally marry Mary, but this will not be the end, but only the beginning of the adventure, as the honeymoon trip will have to be interrupted, and we will have a gorgeous shootout on the train. But before the wedding there will also be a failed bachelor party, where we will finally see Holmes' brother (Stephen Fry), who was mentioned in the first film. There, Sherlock will meet a fortune teller (Noomi Rapace), events will develop in such a way that they will have to act together in the face of a common enemy. Looking ahead, I will say that Holmes and Watson will visit the Gypsy camp, and seeing this funny scene, one cannot but recall Guy Ritchie's 'Big Score'. Yes, even Holmes, it turns out, does not like horses, calling them 'dangerous from both ends'.

Jared Harris as Professor Moriarty is the link that adds some detail to the film, often lost among the abundance of action and jokes. Moriarty is a worthy antagonist of the protagonist, and Holmes himself admits it. Harris' play makes the picture more elegant. Speaking about the actors, I would like to note that, unfortunately, Eddie Marsan was given very little screen time, which is upsetting; but the new character, Sherlock's brother Mycroft (Stephen Fry), brings a solid dose of humor into the film. 'Is there another Holmes ?!' - Mary exclaims indignantly. There are funny episodes at the Mycroft estate, especially the one with the aged butler.

There are also more scenes using the signature slow-mo, showing the deductive abilities of the protagonist. They are excellently executed, and it pleases the eye. One of the most elegant and technically sophisticated episodes is a shootout and a chase in the woods closer to the final of the picture, very impressive. It is also worth noting that the stylization of the film with various technical gadgets and exotic weapons is also carefully worked out here, and already closely borders on steam punk.

In general, Guy Ritchie, remaining at the helm of the project, did not disappoint at all, but on the contrary, presented a first-class spectacle, continuing to develop the universe of his 'Sherlock'. Shadow Play, with a good backstory that has already paved the way for it, focuses on the spectacular techniques that became the hallmark of the first film, and develops them to a much greater extent. More exciting action, more sophisticated camera techniques, more humor. If you liked the first film, it makes sense to watch the continuation without fail.