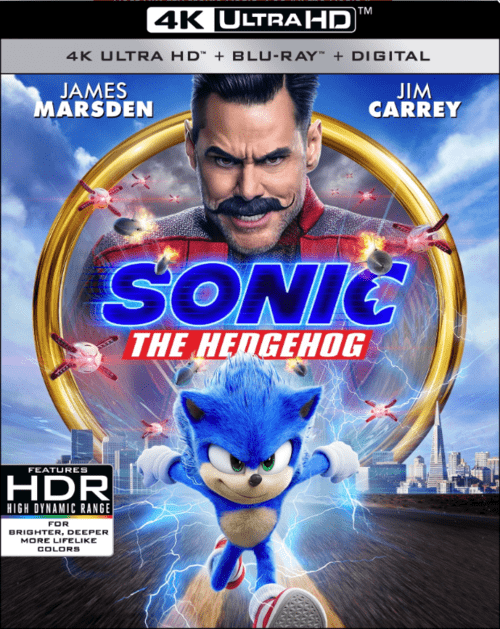 4k movies reviews
Until now, there are a huge number of truly iconic characters in video games, which are quite suitable for adaptation. Another thing is that most of these same adaptations go far from the very top quality. Really worthy projects can be counted on the fingers. And it would seem that exactly the same thing was waiting for the new Sonic. In particular, fears appeared after the demonstration of the first poster with a blue hedgehog, and then the appearance of the first trailer, where many beloved childhood heroes looked like something very unintelligible. The wave of popular indignation was not long in coming, and it was soon announced that Sonic would survive the redesign in his cinematic incarnation. And indeed, after a while, the same character image familiar to many appeared that I even want to go to the cinema for.

The plot will tell us about a very strange creature that turned out to be strange even for its native planet, on which it was born, to say nothing of the Earth, where a blue hedgehog thundered by the will of circumstances. But here, over time, he developed an insidious detractor in the person of Doctor Robotnik, who wants to get Sonic by any means for conducting countless experiments and experiments. But in addition to the sworn enemy, Sonic also had a real friend - police officer Tom Watchowski. The latter decided to defend the seemingly absurd alien, and confront Dr. Robotnik.

Well what can I say? The closest analogy, in principle, is last year's Detective Pikachu, which likewise has a direct bearing on video games, and a huge fan base, even probably larger than the blue hedgehog. Only now, if Detective Pikachu tried to reveal some of his inner universe, at least to make it deep, did Sonic in the Movies go along a completely different track altogether. In fact, they don’t tell us anything about Sonic’s home world, about the mushroom planet, and even the main antagonist seems to have no significant background. It is certainly obvious that the work is primarily designed specifically for children, and I will not ask at least part of the many questions regarding the plot, but there are also those who grew up on video games about Sonic. But come on, the picture itself turned out to be quite pleasant, and the local atmosphere really corresponds to the games about Sonic, albeit not to the fullest extent. But besides Sonic, the inimitable Jim Carrey, who had not appeared in such vivid, and probably even old-school roles for himself, is pulling most of the blanket over himself. Watching him here, you perfectly understand why Kerry is one of the most worthy actors and comedians to this day. Heck, only he can fool around so that it is funny not only to children, but even to adults.

The rest of the cast is somehow not particularly desirable. Marsden is ordinary here, that is, he seems to have coped with the task, and somehow for a long time he was not visible in projects of this level, but you understand that any other actor with a similar texture could quite replace him. If, again, back to comparisons with Detective Pikachu, then for example, Sonic in the Movies has a lot more of some provocative action, as well as a wide variety of situations. “Sonic in the cinema” turned out to be a standard work for a young audience, which is not without some negative aspects, but nevertheless the picture copes with its main tasks quite well, I don’t want to scold this film at all. At least for the sake of the excellent Jim Carrey, I want to wait and the sequel, which is likely to be.