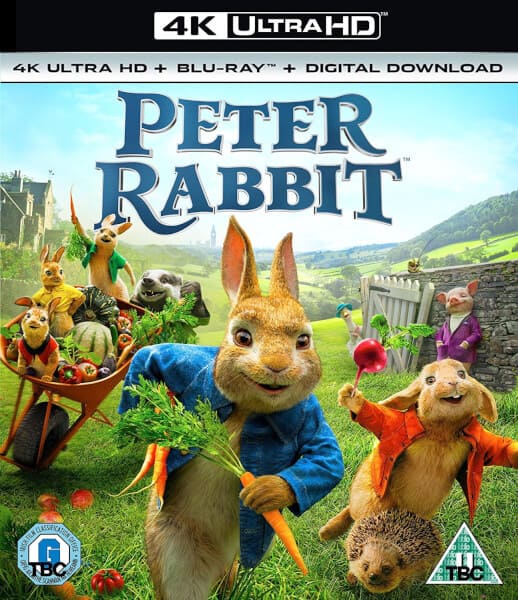 Story
Based on the books by Beatrix Potter: Peter Rabbit (James Corden;) his three sisters: Flopsy (Margot Robbie,) Mopsy (Elizabeth Debicki) and Cotton Tail (Daisy Ridley) and their cousin Benjamin (Colin Moody) enjoy their days harassing Mr McGregor in his vegetable garden. Until one day he dies and no one can stop them roaming across his house and lands for a full day or so. However, when one of Mr McGregor's relatives inherits the house and goes to check it out, he finds much more than he bargained for. What ensues, is a battle of wills between the new Mr McGregor and the rabbits. But when he starts to fall in love with Bea (Rose Byrne,) a real lover of all nature, his feelings towards them begin to change. But is it too late?

Peter Rabbit 4K Review
Peter Rabbit 4K is a story I grew up with so I had to see this movie. I had no expectations. I don't think I've laughed throughout an entire movie like I did watching this on a very long time. People commenting about the allergy scenes need to lighten up! and that's coming from someone with allergies that put a damper on my life practically daily. Seriously, it's such a minor part of the movie, laugh, don't laugh, and move on. The movie has many good messages: knowing when to fess up and admit you did wrong (imagine that! Accountability!), making apologies (woah, again with owning up to your actions!), the impotance of friends and family, and more! Also, a great cast and a fabulous soundtrack.