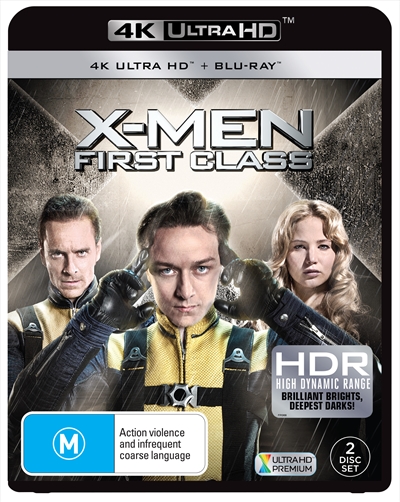 Storyline
Before Charles Xavier and Erik Lensherr took the names Professor X and Magneto, they were two young men discovering their powers for the first time. Before they were archenemies, they were closest of friends, working together, with other Mutants (some familiar, some new), to stop the greatest threat the world has ever known. In the process, a rift between them opened, which began the eternal war between Magneto's Brotherhood and Professor X's X.

User Reviews
What stands out in this movie (besides the look of some of the mutants), is the clever way in which all the pieces fall into place as a prequel which cements the backdrop and tone for the previous X-men offers. This one however, stands above them though for the consideration and tact that has gone into developing these understandably complex characters. Resulting in a more complete movie experience.

The leading cast do a brilliant job in giving you a sense of their conflict with ingredients such as prejudice, ignorance, a sense of belonging and bitter revenge giving the film a more humane feel than a lot of dramas allowing you to connect with the characters more easily.

The special effects- lets not forget, are top notch as expected, but surprisingly very in-keeping with the film and doesn't take away from the other elements of it. The violence is clean but present, pitched right between a young and adult audience. There's also a decent amount of ironic humour thrown in, which, considering the party tricks on offer (by that I mean the powers and peculiarities of the mutants), just comes and goes naturally without feeling forced as like a lot of comedy moments in films of late.

Bottom-line, this is a well-constructed, well acted Marvel film. I wasn't totally convinced beforehand, casting James McAvoy as the young Xavier, a full head of hair and northern accent doesn't seem the best fit after all. I can say that he fully realised that role and showed his range in playing a more commanding lead. Michael Fassbender has great screen presence and does a good shift as the Magneto to-be and Mr Bacon adds another interesting element to the story. All the supporting cast give a solid performance with everyone focused on the exciting job at hand and no weak links.

Easily worth the cinema admission and thank god they didn't make it in hit-and-miss 3d, there's just no need! The best of the X-men franchise.