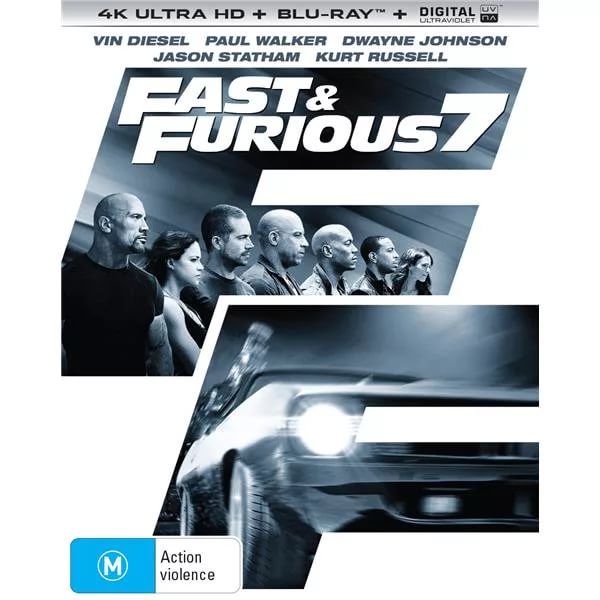 Storyline
Dominic and his crew thought they'd left the criminal mercenary life behind. They'd defeated international terrorist Owen Shaw and went their separate ways. But now, Shaw's brother, Deckard Shaw, is out killing the crew one by one for revenge. Worse, a Somalian terrorist called Jakarde and a shady government official called "Mr. Nobody" are both competing to steal a computer terrorism program called "God's Eye," that can turn any technological device into a weapon. Torretto must reconvene with his team to stop Shaw and retrieve the God's Eye program while caught in a power struggle between the terrorist and the United States government.

4k movies reviews
After the tragedy in November 2013, which claimed the life of one of the main actors and faces of the franchise, the fate of "Fast and the Furious 7" could have been different. In the worst case, the film could not take place at all, or it could become tattered and fall apart into incoherent pieces. But in the end, everything turned out, perhaps, in the most favorable (as far as one can put it, given the circumstances) way, and at the exit we got the most ambitious film of the so-called epic.

Last but not least, this is a big and, perhaps, the main merit of the leading performers and filmmakers, who remained faithful to the project to the end and truly put their souls into it. After the accident, they were not taken aback and did everything necessary to not only complete what they had begun, but also to do it with dignity, paying tribute to their friend and colleague Paul Walker, who was undoubtedly dear to each of them. In addition to participating in six "Fast and Furious", it was he who once came to Universal Studios with the idea of making a film about street racers, which grew into one of the most profitable film franchises of our time.

It is rare to find a team that is so devoted to their project and the people involved in it, and whose members have become a real family not only on the screen, but also in life, no matter how hackneyed it sounds from the lips of the actors and their characters lately. Whatever one may say, this statement is truthful and sincere, which cannot but admire and gives an additional incentive to positively evaluate the picture.

Yes, the film directed by James Wan is not perfect. In places it is uneven, filled with a wide variety of cliches and completely ignores such a concept as "logic", but at the same time it does it openly, basking in its own frivolity, and thanks to the powerful driving force that pours from the action movie over the edge, exuding absolute recklessness, find fault and I do not want to turn away from this creation at all. In addition, the tape is extremely full of self-irony, especially strongly emanating from the characters Jason State and Dwayne Johnson, who came off here to the fullest, which can also be regarded as a positive moment. In terms of stunts and special effects, this part surpasses all the previous ones, and let fans of street races, which were once considered the main highlight of Fast and the Furious, will again be deprived, connoisseurs of spectacular chases, fights, explosions and destruction will not leave disappointed.

Of course, Fast and the Furious 7's main mission was to become a worthy Walker swan song, and to be fair, they did more than well. The viewers who grew up with the films of the franchise, those who, in the early 00s, while still a boy, saw Brian O'Conner as an example to follow, their hearts will definitely tremble, and their eyes will fill with tears. The finale of the picture suggests that another era has ended, and you understand how much nostalgia hits the heart, and a certain feeling of gratitude overwhelms the soul.