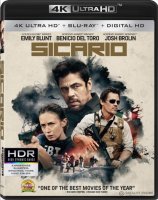 USA Movies / Thrillers 4K
Producer: Denis Villeneuve
Cast:Emily Blunt, Benicio Del Toro, Josh Brolin, Victor Garber, Jon Bernthal, Daniel Kaluuy, Jeffrey Donovan, Raoul Max Trujillo, Julio Cedillo, Hank Rogerson...
IMDB 7.60
File Size 37.1 GB
Film description
Taken from IMDB.COM
The deserted wasteland, which runs the border between Mexico and the United States, is a territory without rules, and a battlefield between Mexican drug cartels and American intelligence agencies. FBI agent Kate Maser, who works in the border areas, tries to stick to her own ideals, although she begins to feel that she is in the middle of the conflict. You can download a movie below.

Matthew Graver. The most mysterious team member is a local consultant, and man without a name, habits, and, apparently, without the past. His true face will open only during a risky operation, during which Kate will have to give her own principles to stay alive.