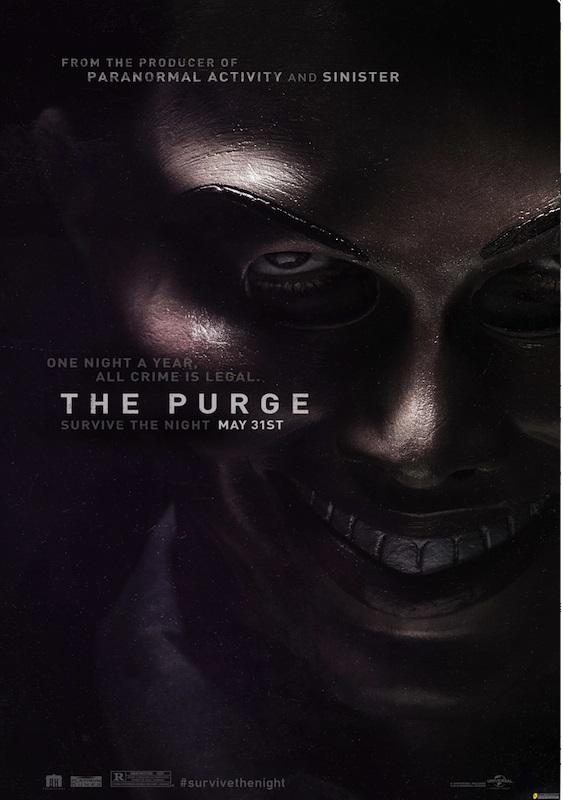 Story Movie
In an America wracked by crime and overcrowded prisons, the government has sanctioned an annual 12-hour period in which any and all criminal activity-including murder-becomes legal. The police can't be called. Hospitals suspend help. It's one night when the citizenry regulates itself without thought of punishment. On this night plagued by violence and an epidemic of crime, one family wrestles with the decision of who they will become when a stranger comes knocking. When an intruder breaks into James Sandin's (Ethan Hawke) gated community during the yearly lockdown, he begins a sequence of events that threatens to tear a family apart. Now, it is up to James, his wife, Mary (Lena Headey), and their kids to make it through the night without turning into the monsters from whom they hide.

The Purge 4K Review
The idea is intriguing. For twelve hours a year all crime is legal, including murder; do what you want and face no consequence. All emergency services are suspended and with the exception of an unexplained restriction on weaponry, and certain members of the public being out of bounds as targets, there is nothing to stop you doing what you wish. The result is a venting of frustration and anger, a purging of demons, as well as the eradication of the poor and those unable to defend themselves. The end result of this annual purge is extremely low unemployment and crime, and a fantastic economy; "a nation reborn", where the weak are prey and the strong survive. One of the strong is James Sandin, who sells security systems to fellow high-flyers; these obviously come in most useful on the night of the purge. Of course on the night in question, things go rather wrong and the Sandin family find their home under siege, following their son Max's generous act of letting a victimised stranger in.

For a second, put aside the rather obvious holes in the idea when considered as a practise encouraged at a national level, even put aside the cynical nature of the movie, and we can see the idea may have started out as a distressing vision of a near future, a terrifying "other reality". Indeed, 'The Purge' takes its cue from a lot of previous work that has done similarly; you don't have to look too hard to see various elements of 'A Clockwork Orange', '1984', 'Lord of the Flies' and 'Battle Royale'. The problem is that unlike those works, and unlike 'Straw Dogs', with which it shares more than a little DNA, this story has been watered down to a locked room domestic thriller; a potentially incendiary political fable is devoid of most of that which would have made it so. This is actually typical of writer/director James DeMonaco, who is responsible for the screenplay for the remake of 'Assault on Precinct 13', a film which again extracted a lot of the original's rough edges and tough moments to leave a flat, action driven thriller. Similarly, the scope of the film is rather narrow; with early implication that there will be a study of repressed violence and how the night is used as an excuse, it is then disappointing to see the story steers frustratingly wide of all matters other than murder. The film lacks the gumption to tackle the disturbing elements of our unchecked nature in a way that Cronenberg would have done.

So what we're looking at here is a film which, in different hands may have proved to be a controversial and stirring piece of work, but with DeMonaco scared to grasp the nettle, we end up with a flat, rather tame film, which is given some lift by its better elements, such as the performances and some of the fight sequences. Lacking bite, with a frustrating amount of exposition and not enough dissection of issues, 'The Purge' falls short of what it should have been.

This is not to take away from Ethan Hawke's solid performance, or some of the more effective scenes, but what we would give to have seen this in the hands of Michael Haneke.