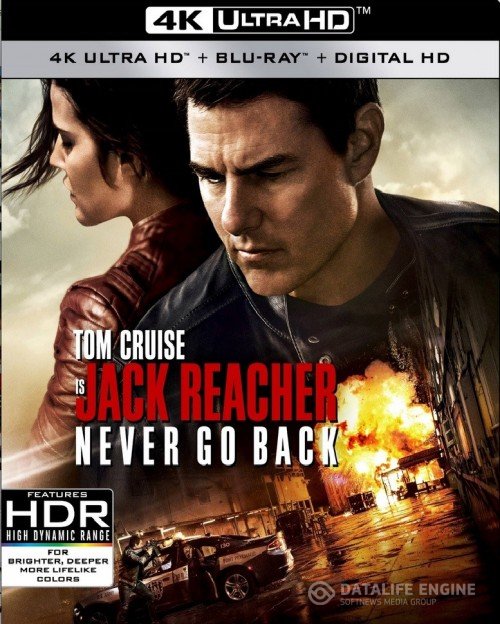 China | USA Movies / Thrillers 4K
Producer: Edward Zwick
Cast:Tom Cruise, Cobie Smulders, Aldis Hodge, Danika Yarosh, Patrick Heusinger, Holt McCallany, Robert Knepper, Judd Lormand, Christopher Berry, Hunter Burke, Jason Douglas, Lizeth Hutchings, Marisela Zumbado, Alexandra Lucchesi, Madalyn Horcher...
IMDB 6.1
File Size 57.38 GB
Film description
Taken from IMDB.COM
Former military man Jack Reacher arrives in Washington for the first time to meet with Major Susan Turner, who led his former unit and helped him out in difficult situations more than once. By a strange coincidence, literally on the eve of his visit, the major is arrested on charges of treason ... Reacher, convinced of Susan's innocence, will have to free her and uncover a conspiracy, the strings of which stretch to the very top. In an effort to get to the bottom of the truth, he also makes an amazing discovery that can change his life once and for all ...

4k movies reviews
I really liked the first film about Jack Reacher because of the intriguing plot, for the excellent cast, for the cool Tom, for the very chic ending, well, the music of Henry Jackman was gorgeous, I was looking forward to the second film and expectations were met.

The continuation, it seems to me, turned out to be at the level, the second part turned out to be completely different and hooks with its history, fights, gorgeous Tom Cruise and many others, well, Jack Reacher's main rival is very good, impressed me much more than Jai Courtney.

The plot this time is built around Major Turner, who is accused of espionage and again Jack has to unravel everything, who is again framed, I really liked that Susan Turner turned out to be such a fighting girl who is used to solving problems herself and does not like to concede, their duet with Jack is very I liked it, they looked good together in the confrontation with the villains, and together they went to the solution to the story in which they fell.

I really liked that the film begins with a very cool moment, which I have not once or twice watched in the trailer, how they try to arrest Jack and how he gets out of this situation and takes the sheriff by surprise - this is a very cool episode.

- Who are you?
- I am the one you wrote off from the calculation

It should be noted that Danika Yarosh, who played Samantha Dayton, was very fun with her throughout the entire film, she is very impudent and cheerful, she quickly became a native, this 18-year-old actress loved to pester with questions, and fit perfectly into the cast, her Sam is wonderful.

I would also like to note the ending of the film, she was very pleased, if in the first part she was very clear and aggressive, then in the second film she is more touching and cute, it's cool that the film ended on such a positive note.

Tom Cruise, played Jack Reacher cool again, in this part he said many times that he considered himself a former major, really liked his coolness, his fights, in some places his humor, amused me the moment when he was interrogated and how he answered monotonously, it looked fun , I was especially impressed by his duet with Cobie Smulders, they were worth each other, and perfectly complemented each other, well, I liked the moments with the young Danika Yarosh no less, it was interesting to watch Jack when he was accused of non-payment of child support, which he never did not see, it looked fascinating.

Cobie Smulders, in addition to her good looks, I liked her first of all with her acting, although the form suits her very much, she looks very sexy in her, as for her acting, I really liked with what desire and with what diligence she sought the truth and tried to expose the one who was higher in rank, it looked interesting.

Danika Yarosh, in the role of Sam, seemed to me such a hooligan and a cheerful girl, I would describe her that way, played quite adequately against the background of her adult colleagues, in general it was a pleasure to watch the whole game of this trio, they all looked great, and everything was worth each other.

As for the main antagonist of the film, he was inimitable, all these murders and confrontation with Jack Reacher was gorgeous, their fight turned out to be quite equal and very cool, no one wanted to give in, if in the first film Cruise was much stronger than Courtney, then it turned out differently , they were equal in steepness, although I liked Jack very much, but I must admit he had a worthy rival.

I really want to continue filming a film about Jack Reacher in such a detective style, it was certainly nice to show his past at least with flashbacks, I really want to know what he was like during the service, if he changed a lot, but this is just thinking aloud as for the continuation, then everything looked fun, dynamic, fun and exciting.

Henry Jackman's music is good, especially in the end, but in the first part, the musical accompaniment was still more abrupt.