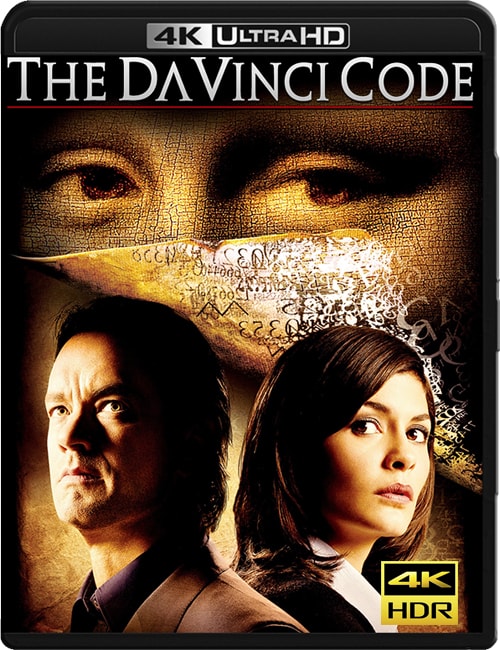 Professor Robert Langdon is in Paris on business when he's summoned to The Louvre. A dead body has been found, setting Langdon off on an adventure as he attempts to unravel an ancient code and uncover the greatest mystery of all time.

From the way the critics have gone after "The Da Vinci Code," you'd think that Ron Howard himself had been jealously guarding the location of the Holy Grail all these years and was just now revealing it to all the world for his own nefarious (i.e. commercial) purposes. Actually, despite all the critical hostility and rancor, this turns out to be a reasonably entertaining adaptation of a reasonably entertaining novel, far from a classic or a work of art, but hardly the pile of cinematic refuse so many of the reviewers have led us to believe it is.

As a work of history, the novel is a passel of nonsense, and only those with a bent towards conspiracy theory overload would be foolish enough to believe a minute of it. But as a work of imaginative fiction, "The Da Vinci Code" certainly gives its audience the neck-twisting workout they've paid good money to receive.

It would be pointless to reiterate the plot of a novel that has probably had the biggest readership of any literary work since "Gone With the Wind." Suffice it to say that a mysterious murder in the Louvre sends a Harvard symbologist and the dead man's granddaughter on a clue-driven search for the famed Holy Grail. Along the way, the two uncover a grand conspiracy on the part of a renegade Catholic order to protect a secret that, if it were revealed, could shake the whole of Western civilization down to its very foundations.

Despite the phenomenal - one is tempted to say "unprecedented" - commercial success of his work, Dan Brown is no great shakes as a writer; his characters are, almost without exception, drab and two-dimensional, and his dialogue, when it isn't being overly explicit in pouring out explanations, sounds like it was written by a first-year student in a Writer's 101 workshop. But the one undeniable talent Brown does have is his ability to knit together a preposterously complex web of codes and clues into an airtight tapestry, and to make it all convincing.

The movie is very faithful to the novel in this respect. It moves quickly from location to location, never giving us too much time to question the logic (or illogic) of the narrative or to examine the many gaping plot holes in any great detail. Writer Akiva Goldsman has encountered his greatest trouble in the scenes in which the action stops dead in its tracks so that the characters can lay out in laborious detail the elaborate story behind the clues. Yet, this is as much the fault of the nature and design of the novel as it is of the man given the unenviable task of bringing it to the screen. Moreover, perhaps in the interest of time and keeping the action flowing, Robert and Sophie come up with solutions to the myriad riddles much too quickly and accurately, with a "Golly, gee, could it mean__?" attitude that borders on the ludicrous. But, somehow, Howard makes most of it work. Perhaps, it's the clunky literal-minded earnestness with which he approaches the subject that ultimately allows us to buy into it against our better judgment.

Tom Hanks is stolid and passive as Dr. Robert Langdon, the college professor involuntarily driven into all this cloak-and-dagger intrigue, but Audrey Tautou has a certain subtle charm as Sophie, the woman who may play more of a part in the unraveling of the mystery than even she herself can imagine. Jean Reno and Paul Bettany have their moments as two of the less savory players in the story, but it is Ian McKellen as Sir Leigh Teabing, an expert on all things related to the Holy Grail, who walks off with the film. His scenery-chewing shtick pumps some much needed life into a tale essentially populated by underdeveloped stick figures.

The religious controversy surrounding both the novel and the film is as ludicrous as it is unjustified. Anyone whose belief system could be seriously shaken by this absurd mixture of unsubstantiated myth-making and plain old-fashioned wild speculation couldn't have had a very solid foundation of faith to begin with.

The rest of us can appreciate "The Da Vinci Code" for what it is, an overblown but epic exercise in code-busting and clue-decoding - in short, the "Gone With the Wind" of whodunits.