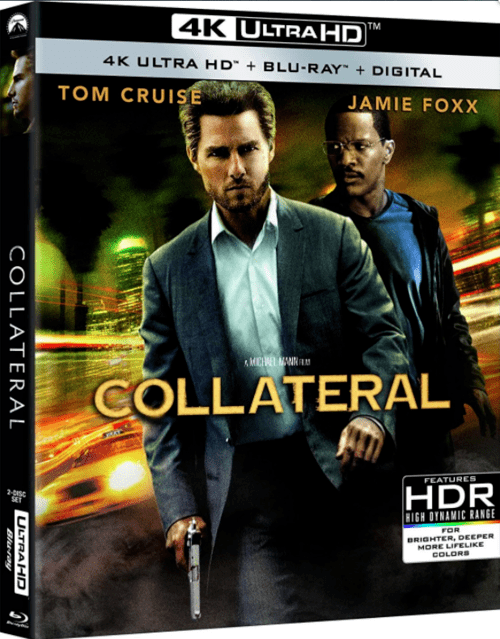 4k movies reviews
Presenting the main character of our today's story to the honorable public is a stupid occupation, to say the least. Well, who in our fast time doesn't know an ordinary taxi driver? About him, dear, and about his difficult life, difficult relationships with family and his blue dream, even a regular nursery group of a kindergarten will guess. However, let's still dwell in more detail on the hero of Jamie Fox.

He is a good taxi driver in a good car with a good reputation in the community. Every day he wakes up with the thought that today will be the last in his old and meaningless life - the dream will come true. But the day passes, and after it a week, months, years - life leaves, leaving only wrinkles on his face and hope for a dream, which he is happy to share with his casual and one-time travel companion. But on this night a strange client (Tom Cruise “Vincent”) will change his life, forever. He will become an accomplice ...

Stop! Enough! I will not fully disclose to you all the plot twists and turns - and so I have already told too much. One more word - and I should have cut off my tongue, arms and head. After all, this story of two opposites must be learned and experienced personally, and any unnecessary detail is an inevitable and unfortunate loss of pleasure.

“Accomplice” is a triumph of style, atmosphere, luxurious music, amazing camera work, verified script and unusual direction. This is definitely a strange film that you just want to tear apart brick by brick (read - into its components). But you know, I will not do this for two reasons. The first is that I always have a decent and better replacement. The second - “Accomplice” simply pierced my cast-iron reviewer's heart. You can laugh, or you can cry for joy, but the film is pulling. Yes, it's just fun to watch.

First, outwardly, "Accomplice" is unlike anything else. Simply put, in recent years, there has not been a single decent digital work in the psychological thriller genre in the film industry that could adequately compete with Mann's film.

Secondly, having watched the film a couple of times, you begin to realize that the plot is not so linear, and the scale is not as large as it seemed at first. You start to notice imperfections in the image, and some scenes start to seem a little drawn out. You start ... Yes, to hell with all these undertakings, when there is such a duet: the timid hero of Jamie Fox, thanks to his filigree play (Oscar should have been there) and the charismatic, seasoned killer Tom Cruise. Vivid characters - vivid cinema, the only one to which I did not prefer a healthy and sound sleep. A new word in the genre is parallel thinking.

Thirdly, there is a different viscous atmosphere here, because one of the largest megacities in the world is presented to the viewer not just as good decorations, but as a real hero. We can sense this smell with our skin, this soft light emanating from neon signs, this style and glamor, and also emptiness. Vacuum in Los Angeles - maybe it's magic or witchcraft, but on the screen everything looks exactly like that, and nothing else.

At the end of my story, I want to mention just one scene in which a taxi driver and his strange guest Vincent are having a heartbreaking conversation about death and conscience, when suddenly, suddenly, a pack of wolves runs across the road in Los Angeles at night.

The very relish of the film, its meaning and idea is laid down precisely in this scene, and not in banal shootings or, God forbid, in chases. In words it sounds somehow implausible, but take my word for it, in reality everything is different. In some unknown ways, to the melancholic music, Michael Mann skillfully intensifies the atmosphere of the film to such an extent that the ground is slowly beginning to break out from under the audience's feet.

That is, at this moment, the digital image takes such a special frame that one involuntarily creates the impression that we have just left the house, headed to the store for milk, and another taxi drove past us - a strange taxi. Yes, definitely the atmosphere is an absolutely mystical substance, thanks to which we, like scalded ones, are like one and the same word on the blue screen: “I believe! I believe! I believe! " and completely stop responding to external stimuli.

And, finally, a tip: after another viewing of Collateral, go out into your street at night. Take a walk, breathe in the fresh air, enjoy the night lights of the city and look at the bright sky, dotted with millions of stars - and you will understand that life is beautiful. And only somewhere deeply inner voice will monotonously gnaw Vincent's words: “You understand? Hundreds of galaxies, hundreds of millions of stars, if there is even a speck on one, no one will notice. So we are lost in space. Who sees us? "

The answer is no one.

Summary: Michael Mann managed to create not a meaningless thriller, but a fascinating story with strong direction, a twisted plot, an unusual picture and an incredible atmosphere of pure madness in such a metropolis as Los Angeles. Become a movie partner; a partner in the game; complicit in emotions.