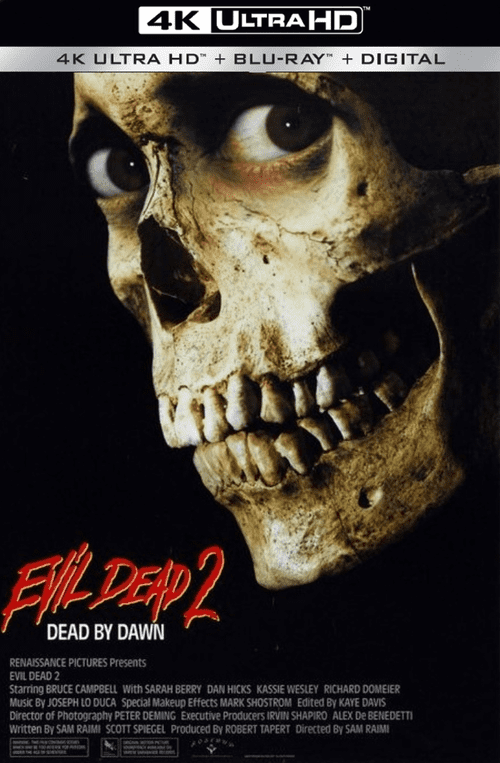 4k movie reviews
"Evil Dead 2 4K" - a great horror film, refuting the popular belief that the sequel is weaker than the original. The second part of the adventures of Ash in the performance of Bruce Campbell is supposedly the first part improved by all parameters, even considering that six years have passed between the paintings. Immediately we discard the inconsistencies of the finals of the first part and the beginning of the sequel, because of which it seems impossible that Ash returned to a bad house. Not a single normal person would go again to the place where the dead come to life, the Books of the Dead are found, and only a couple of people remain alive. But this is a movie.

The continuation is no longer able to surprise the story about the "Necronomicon" and the unknown Evil in the forest. But this time the movie is much more dynamic, and Ash from a frightened young man turned into a real crazy fighter with evil spirits. More humor, more blood, more funny dead with rolling eyes, and a couple of truly impressive monsters from the basement. Immediately obsession girlfriend Ash, who with his insane antics can drive anyone crazy. And the famous chainsaw with a double-barreled gun, and even a flight back through time, but this is already in the third part.

"Evil Dead 4K" has always been considered a horror film with pertinent black humor, and with this I fully agree. The creators do not go too far, only slightly surprised by the behavior and design of those very dead. Evil in the forest still makes an impression, well, the hero Ash is inimitable. He manages to simultaneously be afraid of what is happening around him, and at the same time quickly come to his senses and deal in a rather cynical way with the creatures of the very Book of the Dead. The second part in this case is the “golden mean”, since the first was boring and Ash was not so “cool”, and in the third there were too many fiction and comedies.

In my opinion - one of the most successful sequels in the history of the horror genre.