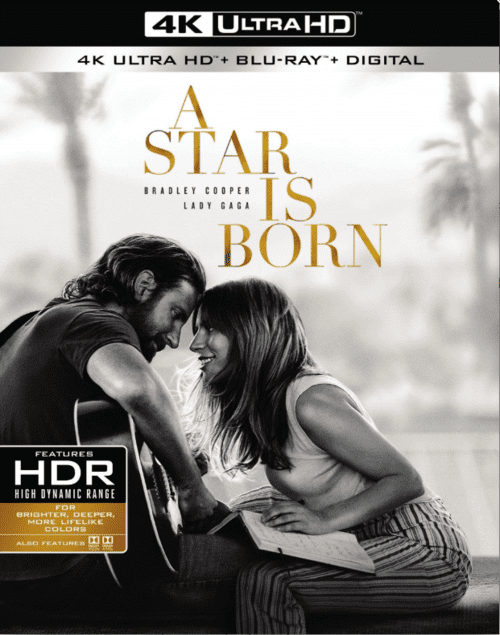 4k movies reviews
When you find out that a famous actor decides to make a film, the attitude towards the project becomes ambiguous. It seems to be interesting to see the results of such an experiment, but I also want to leave the matter to a professional. After all, we know a lot of directorial works of actors who were very average. So I waited cautiously for the Bradley Cooper film, the fourth remake of the famous Hollywood story The Star was born. And then the high marks of critics and the nomination of prestigious awards dispelled my doubts and prompted me to see this tape.

Career country singer Jackson Maine is going through hard times. The situation is aggravated by his alcoholism and progressive disease, due to which he may lose his hearing. One night at the bar, he sees the performance of Ellie. Impressed with her vocal abilities, Jackson starts a friendship with her, which soon flows into a passionate romance. Jackson is also trying hard to help Ellie become a real star. However, the more popular Ellie becomes, the faster the fame of Jackson himself fades, which leads to problems in their relationship.

One of the reasons for the success of Bradley Cooper can be called the atmosphere - this is essentially one of the stories of show business, which he is very familiar with. This bright, brilliant and at the same time cruel world of show business, where every minute a new star lights up, but at the same time the old one fades away ... I think that’s why Cooper managed to make a movie very realistic and sincere. After all, this is a story about people - about their relationships, plans for the future, about their dreams and experiences, joys and fears, successes and mistakes. Due to this, the film has turned out very sensual, sincere, lively, touching, real. Cooper has a good directorial potential, and in the future I will be looking more closely at his new projects.

True, the main thing here was the duet of Bradley Cooper and Lady Gaga - Jackson Mayne, the once legendary singer, whose time passes, and Ellie, a singer with a wonderful voice, whose career is just beginning. Beautiful couple, you can not feel the chemistry between them. I remembered Cooper more by the roles of comedic characters, but here his hero is a truly dramatic character, one can even say tragic: Jackson understands that his career is almost over, as he is deaf of hearing and the connection with reality due to alcohol. But everything changes when he meets Ellie. And here is a real revelation - I already saw Lady Gaga in Sin City 2 and American horror history, I knew that she had acting data, but now she declares herself as a serious dramatic actress. Ellie seems completely ordinary, even plain, but completely transformed when she sings. And when Jackson appears in her life. Together, the characters complement each other, flourish and change. Their relationship is full of tenderness, sensuality and love. But all is not so smooth - after all, the glory of Ally becomes for the couple a serious test of the relationship of strength. And it is still unknown whether they can survive this?

And we should not forget about the soundtrack - the songs were just beautiful. We can say that they become a kind of declaration of love between the main characters. The most powerful compositions Shallow and I`ll Never Love Again - can not help but feel the emotions that overwhelm the heroes and the love they feel for each other.

Alas, I did not see previous versions of the plot The star was born to compare with the original source. And yet, this is a high-quality and dramatic musical film with serious ambitions in the premium season. The film will definitely appeal to all fans of the genre.