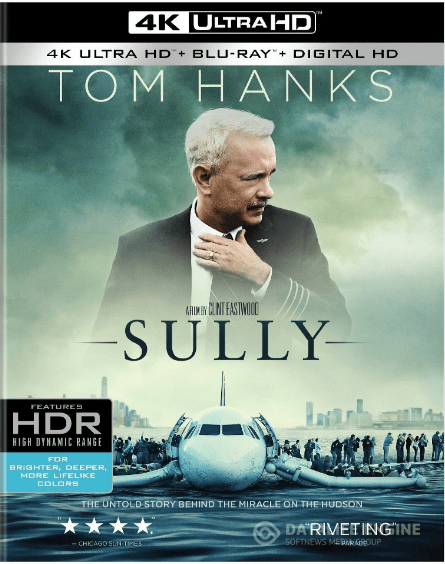 USA Movies / Drama 4K
Producer: Clint Eastwood
Cast:Tom Hanks, Aaron Eckhart, Valerie Mahaffey, Delphi Harrington, Mike O'Malley, Jamey Sheridan, Anna Gunn, Holt McCallany, Ahmed Lucan, Laura Linney, Laura Lundy, Onira Tares, Gary Weeks, Katie Couric, Jeff Kober...
IMDB 7.5
File Size 39,56 GB
Film description
Taken from IMDB.COM
On Thursday, January 15th, 2009, the world witnessed the “Miracle on the Hudson” when Captain Chesley Sullenberger glided his disabled plane onto the frigid waters of the Hudson River, saving the lives of all 155 aboard. However, even as Sully was being heralded by the public and the media for his unprecedented feat of aviation skill, an investigation was unfolding that threatened to destroy his reputation and his career.

On the supplemental material for the film, the filmmakers question whether this story had much more it could tell beyond the landing. They’re not sure that’s enough and if they can flush out more. With it being a biopic and seeing a 1 hr 36 min runtime, I was kind of surprised at how short it was. Then hearing them discuss this and seeing the film, they got the bare minimum to milk this story for. There are areas that could have been excised, but they become necessary to pad the runtime in the end.

Sully winds up being the story that’s still fresh on the brain and most of us already know, without any sort of extra zest or appeal to it. Its very paint by numbers and told in the most straightforward way possible. Luckily, it is short, but its still kind of a snoozer just getting through the check off points. The sound design on the plane landing is impressive, but the way its shot and handled with the editing is rather pedestrian and almost not unengaging. We’ve seen better from Clint Eastwood, this just feels like he’s on cruise control. I didn’t like Jersey Boys at all, but it felt like he was trying to put some sort of stamp on this. Here, it feels like he may think this thing is going to sell itself.

If it wasn’t for Tom Hanks, I don’t know if this film would hold together or be much better than a cable television channel’s “movie of the week” interpretation of it. Hanks truly gives a performance better than the film deserves and is the one keeping it afloat, knowing all eyes are on him in almost every shot of the film. Like the professional he is, Hanks is fully transformed and a complete persona in every frame. Unfortunately his co-stars can’t be as well service. Laura Linney is wasted here, and honestly could have been cut from the film. Aaron Eckhart chews a little too much scenery on a underwritten part. Mike O’Malley is quite good here and Anna Gunn is fun but disserviced by a pretty cruddy “magical discovery” moment in her dialogue later on.

Clint Eastwood’s Sully is pretty much just average and “fine”. With something heroic and depth defying as the event in the film was, I’d rather like something that lives up to that with the execution of the film. If the story is what it is, then tell it in a more interesting way. The best thing about this film is Tom Hanks, who isn’t Oscar great here, but he’s the one keeping this thing worth watching and bringing it up to that “average” that I referred it to. I sound harsh for a film that I said is “ok” and gave 3 stars to, but really, its not awful, it just settles with being fair and nothing more.

Clarity/Detail: Sully lands on 4K UHD with a rather beautiful and full looking image. Details are extremely strong in this presentation. Clothing threads, textures, wood grains and many more natural appearances give that window-like look to them. Skin, which I’ll get into more below, looks insanely good. HDR is present, but the films lighting and such lends to really show off in just a few key areas. Don’t take that the wrong way, though, as this picture quality is quite outstanding.

Depth: Dimensions work pretty well here in the picture. Interiors, like the plane, have a good, separate relation with the backgrounds. Characters move natural and smooth with no hindrance. Shots of the plane in the sky are also smooth with nice revolving camera movement to help accentuate the dimensions.

Black Levels: Blacks are a big point of emphasis on this terrific looking film. There is a great deal of saturation between all of it here. Darkened scene still manage a hell of a lot of impressive detail on black clothing, surfaces and more. Blacks are just dark, there are good amounts of lighter looking blacks and variations throughout the lighting schemes throughout. No crushing witnessed at all. Details like hair follicles, patterns, textures and more shine right through in any given scene with good clarity.

Color Reproduction: Colors are pretty strong, even if there is nothing that pops. Red from tail lights on cars, or illuminated buttons from controls pop and stand out. Fire from explosions also feel the HDR love. Yellow taxi cabs and a lot of blues really stand strong here. Most colors are pretty bold and look very natural and true to life in the overall look of the picture.

Flesh Tones: Skin tones are very impressive here. They look natural and extremely lifelike (Like through a window) and manage a consistent appearance throughout. Stubble, moles, freckles, lip texture, blemishes, bumps, wrinkles, make-up lines…you name it, you can see it from pretty much any camera distance. I was impressed at how full and solid the character’s skin looked in this transfer.

Dynamics: Sully is a very “talky” movie, but it does bring quite a terrific sound and healthy mix to this Atmos track. When dealing with everything regarding the plane flying and the crash, your room will rock and shake and things get rather intense and ever-present. Its boom, action packed and provides a real rush. Surrounding those sequences are a lot of office investigations, hotel rooms and such, but they are quite nicely done to a degree that its very true to life and natural.

Height: Above your head, you’ll get some decent sounds unique to that channel, like the plane flying above. But mostly its in cooperation with the other speakers and ambient noise.

Low Frequency Extension: Most of the bass and deep hits in the film come from plane sequences during the crash. The birds slamming into the plane, engines blowing, cabin pressure and the rough landing right onto the Hudson.

Surround Sound Presentation: Speakers have an accurate tracking of movement coupled with placement of the planes flying as well as people walking through rooms and city streets. Side and rear speakers supply a lot of ambiance, but there are nice little intricacies mixed in to them at times to add a unique flavor. Environmental work, be it inside the plane or in an office, sound genuine and lifelike.

Dialogue Reproduction: Dialogue presents itself very clear, with good bass in voices of those that are deeper and full diction.

Summary
Sully isn’t bad, its just very paint by numbers and generic in terms of its execution. Like I said above, without Tom Hanks, I don’t know that this film would hold together. Its 4K UHD presentation is very pristine, with a bright, crisp detailed picture accompanied by some very thought out and impacting audio in its Atmos track. Extras are pretty solid and a good companion to the film without overdoing it. I’d say this is more of a rental kind of film, but if you’re going to buy it, this is a solid package. 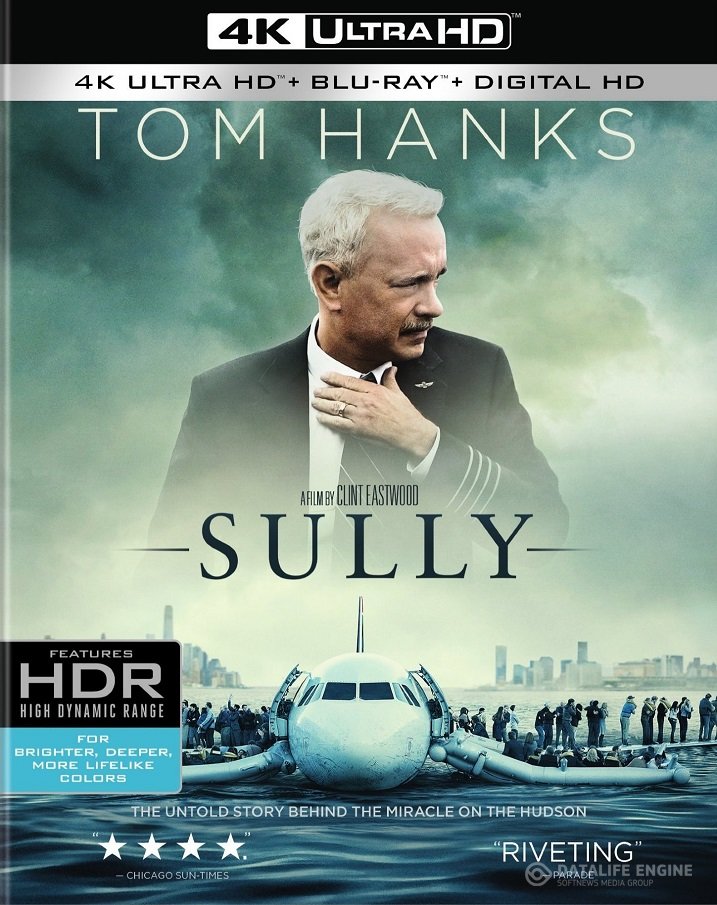