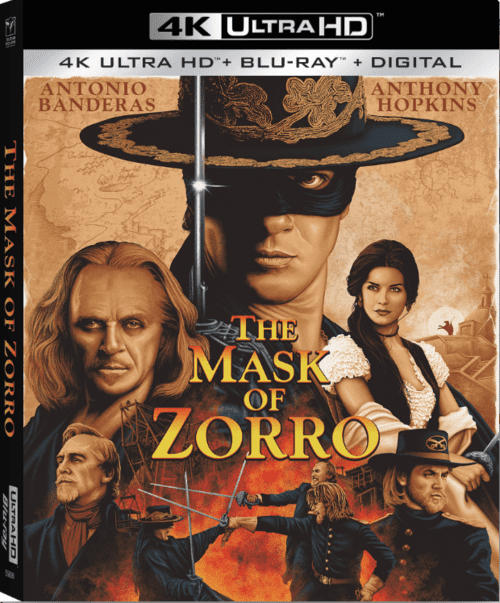 4k movies reviews
Zorro - a famous character, defender of the disadvantaged, Robin Hood from California - has been known for a long time, it seems that he has already celebrated his centenary. His image stepped from books to screens and won the hearts of millions. More than twenty films have already been shot and this is clearly not the limit.

Based on the foregoing, my next confession may surprise someone: I first watched a movie from this series. This name, of course, I heard, but before, Zorro and I somehow had not met. Thus, the impressions are fresh, I can not compare with other paintings about this hero.

I really liked this movie! Bright, dynamic, with charismatic actors, immersing in those distant times, making you laugh and worry. The mysterious avenger, hiding his face under a mask, appearing at the very last moment - oh, the women are quietly dying ... I remembered Batman and the nameless hero of Eastwood (Joe). Anthony Hopkins and Antonio Banderas are very organic in their roles, a beautiful woman Catherine to match them. The work of stuntmen, including on horses - bravo!

The idea of passing the baton to the younger generation is good. Someone will say ironically: “Well, yes, Zorro washed the wild guy and quickly made him a gentleman. Graceful in dance, sharp on the tongue, charming with a girl - it doesn’t! This cannot be achieved in a short period of training. ” Of course, it doesn’t happen, I will answer. But this is a fairy tale! Tale for adults and teens. It is not necessary to disassemble it from the point of view of common sense and life experience, there are other films for this.

The first appearance of Zorro turns a terrible day for the townspeople into a cheerful booth. It saves the unfortunate, kills the enemies and makes it all laugh. No, I usually don’t laugh when someone falls, bumps. It’s not funny for me when it hurts another, but sometimes it’s taken off so talented and funny that it even gets me through.

Well-chosen music, going where loudly and where in a quiet background, clearly shows that there is more than one dance in the film. Yes, a pair of Banderas - Zeta Jones looks great, and look, the audience will go dancing. But sword fights are also a form of dance in this film. Dances are different, bullfight, for example. Confrontation with rhythmic music with a similar purpose. Passionate dance with a woman - the desire to win, but the enemy must be defeated - the parallels are obvious.

Attempts to ride a mustang, fights - this is something! Real fun. "The legendary hero is back!" - yes, it is noticeable.) “Horse, come to me”, - oh, I can’t! And how do you like one of the rivals of the young Zorro in the sword battle, which he stripped? Silent, suddenly for someone it turns out to be a spoiler. The last third of the film is intense, not funny anymore, the suffering of people is touching. What should end, of course, and nonetheless ...